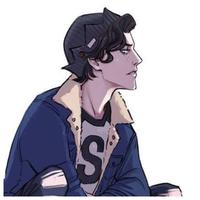 Rolf was born into a pureblood family from Scotland in St Andrews. Hi parents? Jane and Carson Higgins. Rolf didn't have any siblings, he never would. His parents were perfectly fine with having one child and Rolf enjoyed that for a long time.
Rolf had always been a boy with a big imagination, he loved to read, write and draw. He was also very smart, in school he would read and know things far beyond the abilities of his classmates.
Life was fine and dandy, until one day Rolf came home from a sleepover to find his mother had died form unknown causes. His father was accused of murdering her and with little evidence, other than him never confessing to the crime, Carson was sent to Azkaban.
Rolf was about 7 years old at the time, though luckily he had family in London that he could live with.
His aunt and uncle try to make things as good as possible for Rolf after what happened and Rolf is doing alright, he considers his two little cousins basically sisters at this point and he loves them to death.

When Rolf was 11 he received his Hogwarts letter, getting to attend Hogwarts was one of Rolf's biggest dreams. He was extremely excited, sitting on the edge of his seat the entire train ride. Once he arrived at Hogwarts and got the sorting hat placed on his head he was sorter into Ravenclaw house.