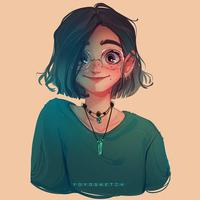 Personality: Teuila is a very spontaneous and cheerful person, she isn’t quick to jump to conclusions but is often also too impatient to simply wait things out. She’s unorganized and often a bit too hyper for her own good. She likes challenges or just activities in general, she will jump into any project or activity without thinking about it twice. She has a very childlike wonder to her, having lived the majority of her life without magic gives her a very open and amazed look at magic.
Teuila has a generally bubbly feel about her, she’s almost always excited and will not let a few simple bad things ruin her day. Although in a way at times that might seem a bit too “Happy go lucky” or maybe even shallow, she is far from it. Teuila generally knows when to be serious. She, for example, takes her studies very seriously as well as how her and other people’s actions might affect others. She is very aware of her surroundings, despite that at times it may not seem that way.