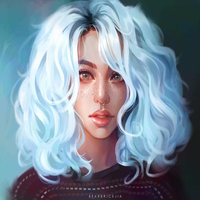 Appearance: Messy, wavy, platinum-blue hair (charmed that way of course), hazel eyes, 5'6 with an inverted triangle shape. You can often find her in a pair of fitted blue jeans with a sweater covering a colored t-shirt with a cup of coffee in hand.

Laura is the oldest of two siblings both of who studies at Hogwarts years before her and was born in Melbourne, Australia. Her father is a Professor of Biology at the University of Melbourne and her mother works for the Australian Ministry of Magic in their equivalent to the Accidental Magical Reversal squad. Her older sister moved to the states after graduating from Hogwarts and studied under the wandmaker Gregorivitch to learn about wandlore while her older brother is currently traveling the world to take a break from his studies.

Laura is a first-year currently finishing up Transfiguration, DADA, and Astronomy. She has completed all the other courses. Joining her on the adventure is her loyal companion, Kendrick, a sweet, but mischievous barn owl. After graduating from Hogwarts - assuming everything goes according to plan - Laura hopes to become a potioneer and help at the Ministry of Magic or open her own Apothecary shop.