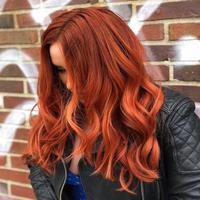 Was very unsure about this oc buuut…

1.) Cassandra Andrews was in the great hall. She nibbled on a piece of toast. When she finished eating Half of her toast she looked up to see an owl in front of her. She rose a brow, clearly confused. The letter was addressed to her. She frowned. She never got letters. She took the letter and gave the owl a piece of her toast. She but the letter in her jacket pocket. She shook off her emotions and cleared her face. She pulled out out her book and buried her face in it and started to read.

2.) Cassandra Andrews looked around at all of the families. Her parents had already left. She carried her stuff onto the train and stumbled into a compartment. She muttered under her breath," screw my clumsiness." She put her trunk up on the rack. She closed the compartment door and stared out at the window at the other families. She couldn’t help but feel a bit jealous. She pushed the feeling down and stared off into space.

3.) Ella Holt, a hufflepuff and a Muggleborn, she walked~ well skipped around the corridors. She smiled and waved at every first or second year she passed. She turned around and walked backwards as she looked around. Little did she know that there was someone coming around the corner....
Accio Profile Posts...