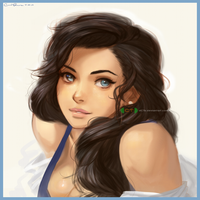 Backstory:
Hi! My name is Zara and I'm a muggle-born. I learned everything from one of the kids I met in Diagon Alley. Anyways, when I found out I was sorted into Hufflepuff I was immediately disappointed and angered. Why did I have to get the most "useless" house? But now, I've learned a lot about the Hufflepuff house and what it means to be a Hufflepuff. The ironic thing is that now I will literally attack somebody if they say anything negative about Hufflepuffs. We're not all crazy nice and boring. No offense to those kids who are though. We love you too. But anyways, I've always been known as the person who stand up for what they believe in while I went to muggle schools. So, that ain't stopping anytime soon. I've already argued with this stuck-up pureblood Slytherin. He threatened to tell his father... Does it look like I care? He was kinda cute, but once again he's stuck up and I don't think he likes muggle-borns that much. Well, that's all I have for now. I'm sure I'll have more to say over the years, I mean it is only my first year. I can't wait for the rest of this adventure.

Good traits: Determined, Loving, Caring, Intelligent, strives for kindness, patient, a good advice giver, smiley most of the time, sarcastic (that can be good or bad i guess but her sarcasm is good most of the times)

Bad traits: Stubborn, a little chaotic at times, when she's mad she's mad, don't fight with her just don't, has strong beliefs and sometimes she can be a little closed-minded but she tries to be open-minded.

Where you can find her: In the kitchen, quidditch fields, or the great hall handing out fliers.