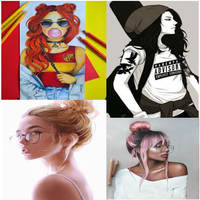 Squad A
Group of OCs

Alyssa Riddle (main oc):
I have long, black hair and green eyes. My mother was a Hufflepuff while my father was a Gryffindor. I have a twin brother named Nathan and a little brother named Christopher. I am two minutes older than Nathan and 7 years older than Chris. I got sorted into Slytherin. I always excelled in my classes and in my third year I made the Slytherin Quidditch team as a beater. My brother was sorted into Ravenclaw and I was devastated at first, but then I had my friends to help me get through it. When I was in my 4th year, I came out as bisexual, leaning more towards girls. I'm now in my 6th year at Hogwarts and I love all of the classes that I am in.
I can speak parseltongue and not a lot of people know that but you know, its interesting to say the least. However to me, interesting is almost always good. My personality types are sarcastic, athletic, sometimes aggressive, sometimes caring, and persistent. I like reading, especially muggle books, they are quite interesting. A lot of people don't trust me because of who one of my relatives are, yeah, Tom is a distant cousin. Don't worry, I won't kill you, unless I find it necessary. For my birthday during second year I got a snake and named him Anonymous. The summer before my 6th year I got a black kitten, and I named her Salem. Dad's abusive but I take the heat for my siblings and mother. It started after I was sorted into Slytherin. He was so angry and I think he may have been angry with me this entire time but me getting into Slytherin was definitely the last straw. I became an animagus and my animagus is a black cat. I became an Animagus before I got Salem but I got her so I would have a cat friend. I have a bird tattoo on my right arm, towards my shoulders.
Friends: Thea, Mari
Wand: Ebony wood, 12 1/2 inches, Phoenix Core
Bisexual
Slytherin
Black Hair
Green Eyes
Single


April Stone:
Gryffindoor
Auburn Hair
Green Eyes
Homosexual/Lesbian
Single
I am an only child and my mother was a Gryffindoor while my father was a muggle so I am a half-blood. I am the seeker for the Gryffindoor quidditch team and I am popular. I love doing pranks and when I'm not doing anything related to quidditch, I'm playing pranks on people, usually faculty members. I am a proud lesbian and almost everyone knows it. I like skateboarding (something muggle that my dad taught me, its really fun) and I also love watching muggle movies. I can come off as annoying sometimes because I talk a lot, but I don't really care, so, yeah. I'm flirty and tough, and if you make fun of me, I will hurt you.


Avery Rees:
Hufflepuff
Blonde Hair
Blue Eyes
Heterosexual/Straight
Single
I have 4 younger siblings and I am a 4th year. I year glasses which I really like. I have a lot of friends. I spend a lot of time in the Library or at the lake. I am very shy, so I don't even know how I have that many friends, but I do. I'm straight and single but I like having friends so I'm fine not being in a relationship. I'm not the best in class, but I make the knowledge I have work, so I'm still passing. I'm a muggle born, so that's fun. I read a lot of muggle books and do a lot of things that muggles do like during the summer I play softball, a muggle sport usually played by the female gender, but it is also played by males, but that's typically slow pitch with adults.


Aleesha Bailey:
Ravenclaw
Light brown hair with pink dyed tips
Brown eyes
Hetersexual/Straight
Single
I have 1 older sibling and I am a 7th year. I am straight and have darker skin. I am top girl and I am single. I am the top of my class because I study a lot. I love watching Quidditch, but I've never played because I'm not very athletic. Both my parents were Ravenclaws before me and so was my older sister, Korina. I have a few close friends but other than that, people only know me because I'm head girl.
Accio Profile Posts...