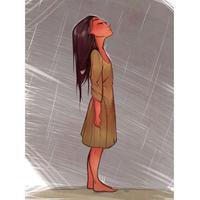 Hi, I'm Aki. I am a Half-Blood, however my father who was a pureblood wizard wasn't in my life so my mother never knew that I would end up becoming a witch, so my letter was a huge surprise. Weird things would happen as I grew up, like the one time that I got picked on for having short hair in the first grade and within a week my hair was longer than all the other girls' hair, or the one time I got into a fight with a neighborhood boy and his backpack caught on fire, but I never thought much of it. When I got to Hogwarts they made us put a hat, the sorting hat on our heads and my new best friend, Kaeridwyn said that I was up there for what seemed to her for fifteen minutes! (She's a muggle born so both her parents are like my mum). But anyways, all that happened to me when I put on the hat was the hat was arguing with itself about which hat to put me into. He said that I could have easily fit into any of them, apparently that's rare because I asked a second year girl named Maeylintia about it and she said that she's never heard of that. But eventually this hat ruled out Gryffindor, and then Hufflepuff, and then Slytherin, till I eventually winded up in Ravenclaw. But anyways, classes start tomorrow and I'm kind of scared, just a little bit. More worried, I guess. I suppose I've done magic but I haven't done real magic. The magic that I have done hasn't been on purpose, so I'm scared that I will be behind all the other kids. I wasn't even raised in Britain, I was born here, but then we moved to America to live with my mum's grandparents and only moved back here two years ago, so I have an American accent... And I didn't know I was a witch, so everything is new. Diagon Alley was cool though. Mum let me get an owl, who I named Harry after supposedly the Greatest Hero of all times, according to some magazine I found there. I want my owl to be the greatest letter carrier, but of course I didn't actually name her Harry, since she is a she. I changed the name a little to Haarie so she could have a more female looking name, but it's still said Hair-ree. I ran into a boy on the train who thought I was a muggleborn since I didn't know what Quidditch was or the four houses, and he said that I'm lucky that I wasn't alive during the 90's since they would kill me. I told him to shut up, that that wasn't very nice. But he said it was the truth, so I told him I wasn't a muggleborn that my dad was a wizard he just left when I was a baby, and he shut up finally. But he seems okay enough, he's a pureblood, meaning both his parents are magical. He also said my accent was cool. His name is Jakrial. He was sorted into Ravenclaw too, but he said that while his parents were in Slytherin they would settle for Ravenclaw. Apparently his parents are old wizards from money, and while they didn't fight in the war which Harry Potter fought in, they still didn't like muggles or muggleborns. He says he doesn't care too much, he just wanted to educate me about what was happening then. He got along pretty well with Kaeridwyn, and wasn't mean so I suppose he's cool enough to be friends with us. Anyways while I'm worried about tomorrow, I'm also really excited, especially for Astronomy. I really think space is cool, so I can't wait to see what the professors (they call them professors here, we call them teachers back in Michigan, and only call them professors in college, it's kind of funny), but I can't wait to see what the professors have to say. I should have read what the books had in them when I got them. Anyways I'm going to go get ready for tomorrow, and hang out with Kaeridwyn and Jakrial before bed.