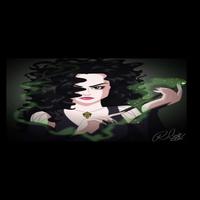 Backstory;
Parker was raised by her parents. She didn't mind Muggle-Borns and Blood Traitors to much, she got along pretty well with them. Most Slytherin's picked on her because she was so nice, but it didn't bother Parker to much. She was happy-go-lucky pretty much all the time. It took a lot to get her down.

Boggart: being completely powerless, life slips from the palm of her hand
Mirror of Ersid: being really powerful
Patronus: Dolphin

Best Friends: anyone who can see past her last name and family, sees that she is nothing like her family

Roleplays i do;
• Romance (VERY rarely)
• Friendship
• Adventure
• Drama
• Golden Trio era
• Mauders era
♧♧Roleplay Rules♧♧
- Don't Ghost Me
- Have good grammar
- No asterisks '*' unless i use them
- I prefer fast responses
- I prefer long replies but any type is fine
- No one-liners
- Have fun! :P
- If it has nothing to do with the roleplay please put these in front '((' and then these after '))' you can also put these; '[' and ']' after, and '{' then '}'
- DON'T control my character