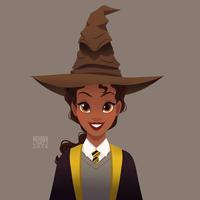 I’m a half - blood (witch mother / muggle father) and I love my parents more than anything. They both have showed me that it doesn’t matter your blood status, but what is truly important is being kind with everyone.
I was sorted into Hufflepuff, but it wasn’t an easy choice; I was the only hatsall of my year, almost five minutes waiting! The sorting hat was trying to decide if I was a Hufflepuff or a Ravenclaw. At the end he saw more Hufflepuff material, and since then I have been just a little scared that he might have made the wrong choice, because I sometimes feel a little different from my fellow Hufflepuff’s; for example, I’m really good at Charms, Transfiguration and Defence Against the Dark Arts, but I’m terribly bad at Herbology and Potions, burning things without even noticing. Since I got to Hogwarts I feel like I have become someone different, but in a good way. I still have my weaknesses present (kind of explosive temper... just can’t stand when people talk dirt about my house) and my strengths (one of the best students in the classes I’m good at), but with them I have learned many things... well, I still don’t know how to stand some of the students in the Slytherin house, but that's actually really funny because one of my best friends is a Slytherin... ironic, right? But that’s just another subject!
My goal at Hogwarts is to learn how I can use my magic for greater things than myself, helping others with it (magical and non - magical)
Finishing up, I see Hogwarts as a home far away from home, the place where I have learned many things and I hope to learn even more!
Btw, my wand is Beech wood with a dragon heartstring core, 14 1/4 and unbending flexibility.
Accio Profile Posts...