Lola Estrella    What am I? 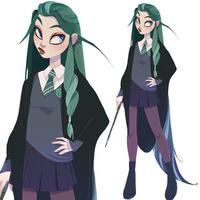 Lola Estrella
What am I?

Just a girl on her journey through the world of magic...while still trying to find exactly where she fits in.
Followers (46)  Following (122)  Friends (38)

When I received my Hogwarts Letter that faithful day, I never imagined what it would mean for me. At first I thought it was just a joke, ya know? My older sister sometimes played pranks and blamed me when weird stuff happened around the house. But, how could I know regular pencils couldn’t write in all the colors of the rainbow? Or that most other people were actually afraid of snakes?
One night while I was snooping through old memorabilia in our attic, I discovered that I am a half-blood witch on my mother's side. She was a pure-blood witch and never told my muggle father out of the fear that he would think she was a "freak" or "evil".
Anyway, I confronted mother about our true identity and one day she agreed to go shopping in London and figured she could humor me. Only after I promised to maintain the secret. Boy, the look on her face when we stopped by the Barren Bulldog pub and the sign said “The Leaky Cauldron” instead!
Now I'm just a girl on her journey through the world of magic...while still trying to find exactly where she fits in.
Patronus: Unicorn
Wand: 11" Silver Lime, Unicorn Hair, Fairly Bendy
Pet: Gray cat named Shakespeare
Interests/Hobbies: Music, writing, anything creative really, dying my hair, adventuring/exploring
Accio Profile Posts...