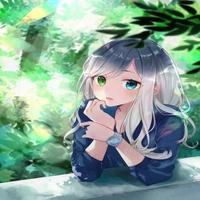 Before arriving at Hogwarts, I was too bully but I didn't think it was important and I didn't tell my parents about it, because if I didn't care about others, wouldn't I? , mainly I am asian bullyng for having ADHD and heterochromania (having eyes of different colors one of my eyes is emerald green and the other sea blue) but it did not matter to me because they are only mundanes who do not know anything and I know that I have my Olympus family and the family of the camp.
I am sold by my grandparents Hades and Apolo, my great-grandfather / uncle Zeus, my uncle Ares, my aunt Artemiza and my great-great-great-grandmother Nix; I hate being sold by so many dibino ages because in the camp half blood they see me as a smug.
I love to sing all kinds of songs and my favorite music genre to listen to is heavy rock.
My parents are Nico di Angelo a son of Hades and half a wizard for calling him in one way and Will Solans son of Apollo and half a wizard because of his mother.
I do not hate Slythering itself but I hate that they think they are the best in this world and apart from that my best friend is Sythering.
I like a moggle internet series called Karmaland and anime.
I usually spend the vacations in the camp together with my parents and my "uncles" Percy, Annabeth, Franck, Hanzel, Leo, Calypso, Piper, Jason, Reyna and Thalia. I like to spend time with my friend Scorpius although my friends shipen me with him.
my favorite class is echisos, defense against the dark arts and quidditch.
I practice fencing and archery.
I can ride through the shadows thanks to my father and grandfather.
Everybody believed that I am emo even though I am not.
My favorite colors are blood red and hot pink. My but it is long but normally when I cut it I donate it leaving me with very little hair although I hate to bring it that short.
my parents are super affectionate with me.
neighborhoods of my friends who know of my powers call me "the girl shadow of light".
I like to cause disasters in potions class.
I like to use some Muggle expressions like: lol, yolo, XD,: v.
I come from 5 homelands since my grandmother from Will's side is from Norway and the one from the USA the one from Nico's side is from Italy I was born in Russia I lived 5 years then there I lived in Mexico 4 years and I am currently living in Los Angeles USES.
My letter came to me on a super sunny summer day when I played in the pool with my parents, the letter surprised them since they did not think that I would erect my grandmother's skills but at the same time they were very happy that their girl would enter to the best majia academy in the world and the three of us were very sad that we couldn't see each other in person other than on vacation