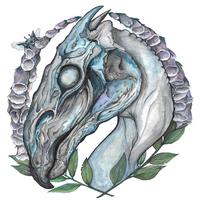 “To be yourself in a world that is constantly trying to make you something else is the greatest accomplishment.”
Followers (27)  Following (32)  Friends (27)

Lucky had a tough start to life. Her father died when she was 3 years old, leaving 7-year-old Christopher and 3-year-old Lucky to deal with an abusive Mother. To make matters worse, their Mother got into a brawl in the Leaky Cauldron. This resulted in lucky being bitten by a werewolf.
Life became worse once Christopher received his Hogwarts letter. Mother only had one to look after, but without Christopher's loving words and helpfulness, Lucky ended up in St Mungo's with many cursed cuts and bruises after transformations. Although after receiving her own letter Lucky became much happier, and healthier.
After boarding the train, Lucky sat with her brother and his friends, only parting ways once at Hogwarts. Lucky got sorted into Ravenclaw unlike her brother in Hufflepuff. They still got along great.
Transformations at school became harder as Lucky tried to conceal her wolfiness - along with many scars.
Lucky is still currently at school and is having a great time.
Accio Profile Posts...