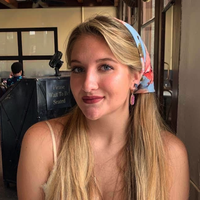 Hi, I'm Margaret Medlar (call me Maggie!), pronouns she/her, and 17 yrs old! I'm a current 7th year Gryffindor who wants to be a Magizoologist once I graduate. I wasn't a hatstall, though the Sorting Hat was between Gryffindor and Hufflepuff for me. In my free time, I like to practice my Divination and help care for the creatures on the grounds. I'd like to play Beater for the Quidditch team! I have a pet Kneazle named Cecily and a family owl named Nostradamus.

I'm a pureblood, though not from one of the ancient pureblood families. My father is a Hufflepuff, my mother is a Ravenclaw, and my sister is a Slytherin, so we have all four houses represented at home! My parents weren't a part of the Order, nor did they physically fight in the war, but they put up wards for our muggle neighbors and were prepared to protect them and fight if Voldemort and his army ever came through. Now, my dad works for the Department of International Magical Co-operation at the Ministry, and my mom works in the Department of Transportation. My sister is in fifth year and wants to work for the Daily Prophet. We live in Puddlemere and have a cottage with lots of greenery. I convinced my parents to let me keep some Porlocks in the field behind our house to scare away the gnomes, but I've also managed to tame a Hippogriff that lives in the nearby woods along with some Bowtruckles and Fairies. I really want to adopt a Niffler but my parents won't let me.