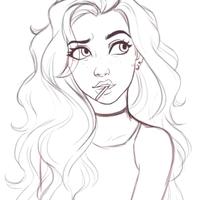 Charlie Auraline Vaughn was born in Los Angeles, California, where her mother worked as an aspiring fashion icon and her father worked at a joke shop. She was told from a very young age that she was "special" in a sense, making her wild platinum hair grow after her mother had cut it off, and even making her father's joke shop catch on fire. She was enrolled at Ilvermorny for a year before she decided to order a large quantity of Dungbombs from Weasley's Wizard Wheezes and set them off in the east wing. Not long after, she was expelled. Her mother and father were both muggles and received a very odd invitation from Hogwarts School of Witchcraft and Wizardry where they let Charlie continue her magical education. She enjoys 90's music, sitting on the beach, eating cookies, tending to her mother's plants, and helping her father in the joke shop.
Accio Profile Posts...