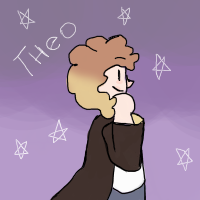 Theo Braith-Lupin is an agender Hogwarts student who does try their best but mainly only stays for the food. They're not very trusting at the first conversation but quickly will warm up to you and try to not seem socially awkward in situations. On a regular Saturday you can find them either eating or studying in the Hufflepuff common room. Sometimes they even sneak into the Kitchens and make some cookies to either apologize or just because they're hungry.

Theo has short messy ginger hair (Not to their chin.) naturally but dyes their hair for different holidays and also just to seem less like a blank canvas. They *have* gotten into trouble a couple times for it but they mostly try to make it up by getting good grades. Green-grey eyes are right below that and they do need glasses but they only wear them when they can't find their contacts. Freckles are all over their face and they have pale-ish skin.

As stated before, Theo isn't very trusting the first (maybe of many) conversations you have with them. Unless you are blatantly dangerous Theo will find a reason to trust you, though. They often overshare things except when under pressure where they undershare. Most of the time they try to appear smart while still struggling with the homework given out. When cracking jokes they're not afraid to unless it's with a person they've fallen out with. Often they carry around a notebook and observe people. Nobody else has read this notebook. Consistently you may hear them talking to themself or telling other people about their novel ideas and they have a separate notebook for all of those. Food and musicals are the two main things they talk about when they are not talking about writing or making jokes or oversharing. To sum it up, they love talking but aren't the quickest to trust.

Is Theo a boy or a girl?
Theo is agender. They use they/them pronouns (which I will add a demonstration below to help you for when you are roleplaying.) and isn't too scared to correct people with their pronouns. Hope that helped! :)

How it works (There's more which you can probably figure out!):

They are a cool person.
I like being friends with them.
Hey, that’s their book!
Theo likes to talk to themself.

Who is Theo based off of?
Theo is mostly based off of myself because my other characters would NOT fit in a Hogwarts environment. (Except for Dennis Lewis.)

Does Theo have any pets?
That depends on the roleplay I'm using them with!


~General Information~
Theo Lupin is what people previously knew as Tessie Lupin. They have changed their name and now roam the streets while living in an apartment and writing for a wizarding newspaper. While they love writing, they do not handle the gossip section and instead mainly write for the newspaper to get a lot more food.

Pale skin and freckles. Short ginger hair with streaks of lavender. They are 5'7 in height and often wear baggy sweaters or t-shirts.


AND DENNIS LEWIS, A CHARACTER OF MINE I MAY SOMETIMES ROLEPLAY WITH? XD? Boop:

Dennis had always grown up feeling he could control things out of control of other. One time he turned tea cups into mice and those mice into cats, it really had been an accident! With a curly blonde head and sparkling brown eyes, slightly on the chubby side, he always looked on the bright side. One day when he was cleaning his room, a chore he absolutely loved, an owl flew in and dropped a letter on his neatly made bed. Dennis opened it with shaking fingers, realizing it was addressed to him. When he opened it he found his Hogwarts letter and his parents were so supportive. A day later they went on a shopping trip to London and they were surprised to find the Leaky Cauldron. Dennis had been overjoyed when he found others that were like him. His wand is 10 and a quarter inches, holly wood, unicorn hair core, and a wonderfully springy wand he has! Dennis always takes everything on with a smile and a small hope that nothing goes wrong. He's a cheerful young boy and is usually excited to share stuff with you.

Despite the cheerful side of him he's also an extreme bookworm and nerd and likes to make sure all of his facts are correct. He usually listens to his gut but more than once this has gotten him in trouble. He has one sibling, his baby sister Jade Lewis. Jade is the mere age of three but has already showed some signs of magical promise. Dennis had always been surprised when he found Jade with a small light in her hands, almost like a firefly, but maybe a small sun. This small boy was sorted into Hufflepuff but feels he doesn't quite live up to the Hufflepuff name.

Dennis is a small boy with big promise, who knows how he'll be when he grows up? :D (it's promise by the way.)