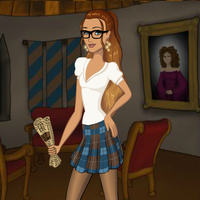 
I am a pure blood Australian witch. I found out I had magical talent at the age of 6, when I accidently changed my mum’s muggle car from blue to hot pink. Let me tell you, she was not impressed at my first magical moment! I attended muggle school until I received both a letter from Hogwarts Witch Craft and Wizardry, as well as a letter from Australian Academy of Magic. I received letters from both as dad attended Hogwarts when he was a child, so any children born from him would be added to the list. My mum went to AAoM, and the fact that we also live in Australia is why I received a letter from them. Ultimately, my parents chose Hogwarts for me, maybe because I begged so much to go out of the country for the first time that I would be able to remember, as I travelled to Scotland to visit dad’s family when I was two.

I was put in the amazing Ravenclaw house and met some amazing friends! My original friends from Year 1 were called Preston, Gray, Lilly and Bryanna. Over the years my friends list grew. I started hanging out in the club ‘Roar Omega Roar’ and spent a lot of time getting to know my dorm, L42.

I did well in most classes, Transfiguration was my worst subject. Defence Against the Dark Arts was my favourite class and I found it the easiest. Charms and Herbology were also in my top three. I played as a chaser in my 2nd year. In 3rd year, I was Ravenclaw’s champion for the Quadwizard championship, but it was called off early due to safety concerns. I was a Prefect for my last few years at Hogwarts, becoming Head Girl in year 7.

Since finishing my education at Hogwarts, I was inspired by my previous Professors into becoming involved in the education sector. And that is how I became who I am today, a Minister of Magic employee in the Department of Education.