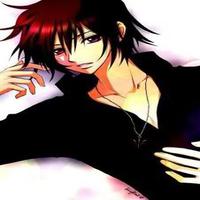 My name is Crimson Balfour Fawkes. I am the only child of Balfour Fawkes and Prudence Porchester. Balfour fell in love with a muggle seamstress upon travelling abroad in search of rare and elusive Potions ingredients. His particular focus, as with quite a few Potioneers, was the search and understanding of Transitional Potions Ingredients. They married within a year and settled within Godric's Hollow to live and I was on the way.

My mother has always been very accepting and understanding of Magic, something that isn't always the case within the Muggle community, and I feel this may be in part due to her relationship with my father. When I was born, my parents knew immediately that I would be magical. In the Fawkes family line, the first magical child and the one to inherit family secrets is born with a red streak in their hair. I am the sole heir of the Fawkes line and even so my red is greater than my father's was. Balfour had a single streak of red, about four to five strands wide, that disappeared before he began at Hogwarts. My hair, however, is very red on top with black underneath and at the back. When my hair lays flat, which it rarely does, the red makes out the symbol of a Phoenix Flame.

It was a thrilling day for all when I received my letter to attend Hogwarts and, although my father came from Hufflepuff, it was a very proud moment to be sorted into Ravenclaw. I am particularly interested in Charms and Potions however I do fairly well in all subjects. I will gladly help anyone who asks for it and my least favourite subject is Astronomy. I hope to be an accomplished Auror or Potioneer once I graduate from Hogwarts but I wouldn't turn my nose up at an opportunity for Professorship, either.