Lesson 6) Of Treasures, Trials, and Endings

As the students take their seats in Professor Morgan’s classroom, they watch with an equal mix of fascination and terror as a python slowly winds his way around the Professor’s desk. From the corner of the room, Professor Anne steps out of the shadows and coaxes the snake down the aisle, and out into the corridor. Seeing the slightly pale faces of her students, Professor Morgan gives a little laugh and a reassuring smile.

Never fear, my dears, while I am no Parseltongue, I do have a way with snakes and can assure you that you were never in any danger. I had Professor Anne bring our slithery friend today in order for us to set the scene for the end of the world. That is, what the Norse believed to be the end of the world, called Ragnarok, during which the Midgard Serpent plays a rather large role.

Before we get to the end, let’s cover a few more aspects of Norse mythology along the way.

Many Norse myths are centered around heroes searching for some sort of treasure. You could argue, however that both the greatest and worst treasures that these gods and heroes found were, in fact, magical talismans, weapons, structures, and rings of power.

The goddess Freyja was given one such talisman by four dwarves who had crafted it. This talisman was a necklace called the Brisingamen and it was said to have shone brighter than the stars. While it did not cause her any grief, it did cause her to produce treasure whenever she cried. If she was on land, and her tears fell on rock, they turned to gold. If she was at sea, however, she created amber with her tears. Two of the greatest magical weapons in Norse mythology belonged to the father/son pair of Odin and Thor. Odin was in possession of Gungnir - a great spear that never missed its mark. Odin himself fashioned the spear from the wood of Yggdrasil and carved magical runes into it.

Thor’s hammer, Mjölnir, was so heavy it was said that only he was able to lift it. While it was a weapon of great destruction - launching thunderbolts and lightening, and capable of smashing the skulls of giants - it was also a symbol of creation, and used in birth ceremonies as well.

Skidbladnir was the most fascinating magical structure in Norse mythology - at least that’s how I see it. Known as the god’s ship, Skidbladnir had been crafted by the dwarves, and could sail across the sea, as well as through the air and over land. As if that weren’t impressive enough, the ship could be folded up like a napkin and tucked into someone’s pocket! I definitely need to meet the dwarves who crafted this magic. I have a few rather large items I would love to be able to tuck away into a pocket!

The last piece of magic found quite frequently in Norse mythology are rings of power. Now, these rings were all symbols of fame, fortune, and power; however some were blessings, and some were curses.

On the blessing’s side, Odin’s ring Draupnir, dripped eight similar gold rings every ninth day, spreading its wealth. Thor’s Oath Ring was also seen as a promise of fair play and good faith. Other pure rings belonged to heroes such as Orthnit, Wolfdietrich, and Dietrich. These pure rings led the heroes to great treasures, such as, in the case of Dietrich, a cape of invisibility, a girdle of strength, a magical sword, and a hoard of highly-valued rings. 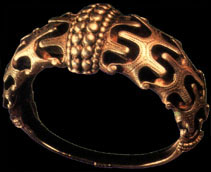 Many rings of power, however, were tainted by corruption and greed, and so they cursed and corrupted their bearer, even if their bearers began pure of intention. An example you are already somewhat familiar with is the ring Andvaranaut. This ring was cursed by Andvari. Hreidmar inherited the ring, who was killed by Fafnir (whom you may recall from our previous lesson), who was in turn killed by Sigurd, to whom also befel a tragic fate.

Before accepting a magic ring, dears, please be sure to have it thoroughly checked out. Don’t even touch it. In fact, just walk away. No ring of power is worth your life!

Magic use in Mythology

While we know that there were magic practitioners in the Norse civilization, it is very interesting to note who could use magic in their myths. While many mythologies across the world have their entire pantheon capable of working magic, this was not the case in Norse Mythology. If you recall from our previous lesson this year, the gods were broken up into two groups: the Aesir and the Vanir. It was the Vanir who possessed the magic, not the Aesir.

Certainly the Aesir could benefit from magic. As we just discussed, many of them both owned and used several magical talismans. Thor alone held two magic rings as well as Mjölnir. They simply did not make the items themselves, nor were they able to practice any magic on their own.

But what about Odin? Yes, Odin was Aesir, but also think back to our tales of Odin as a hero. He spent an incredible amount of time and energy - not to mention self-sacrifice - to achieve great knowledge. In his search for knowledge, Odin learnt every possible thing about magic that he could from the Vanir, Freyja.

Aside from Odin, Freyja was truly considered to be the goddess of magic. She was considered a sorceress, and thought to be able to change into a falcon. Her magic talents were renowned, and it was from her that the magical practice of Seidr emerged, which you can learn more about in Ancient Studies, Year Four, Lessons Seven and Eight.

In our last lesson, we spoke about Odin and his relentless and self-sacrificial pursuit of knowledge and wisdom. The single driving force behind this quest was to find a way to stop Ragnarok - the Norse term used to describe the events which culminated in the end of the world - from occurring. Sadly, this pursuit was in vain, as Odin learned that the one event that was the catalyst of Ragnarok, the harbinger of doom, if you will, had already occurred. Because that event had already transpired, Ragnarok was inevitably unavoidable.

The doomsday event that signaled the beginning of the end, as it were, was the death of the god Baldur (aka Balder, Baldr), by means of Loki’s treachery. This death also signalled Loki’s descent to the dark side, if you will, and his eventual role as the leader of the end of the world.

You may be wondering why the death of this one god was so pivotal. Because he was the best of them. Baldur was the one that never did anything wrong. He was kind and generous and forgiving. He was known as the gentle god, and also as the god of love, peace, forgiveness, justice, light, and purity. He was a son of Odin, and Thor’s half-brother. Baldur, god of goodness and light

When Baldur was young, he and his mother both had a vision of his death. So outraged were the gods by this prospect that they ordered all living things - plants, animals, and gods alike - to swear an oath never to harm Baldur. The myth becomes a bit murky at this point as there are several versions, but the general theme is that one plant did not swear this oath. The plant has been referred to as either mistletoe, which did not swear because it was too young to be able to swear a binding oath, or a willow tree that was under a spell from Loki causing it to refuse to take that oath. In the willow tree version of the story, once Loki’s spell wore off, the willow bent its branches and wept for eternity for the treachery it had been a part of, hence the common name “weeping willow” for that particular species of tree.

Regardless of which plant it was, Loki fashioned a spear or an arrow, depending on the version of the myth you are reading, and gave it to Baldur’s twin brother Hodr (aka Hod), who was blind. At that time in the lives of the gods, they often took great sport in throwing objects and weapons at Baldur who had become for all intents and purposes invulnerable to injury through the oaths that had been taken to protect him.

I’m sure you can guess what happened next. Hodr threw the spear (or arrow) at Baldur, and he was killed. Enraged, Odin mated with a giantess who gave birth to Vali, who in turn grew to adulthood in one day. Vali’s sole purpose was to kill Hodr to avenge Baldur’s death, which he did. Yes, Loki got away with it.

Maybe it was that Loki got away with it that was truly the unstoppable catalyst, for from that point onward he was no longer Thor’s friend and confidante, but more cruel, more meddlesome, and, ultimately, so evil as to intentionally try to end the world.

And so this is what the Norse have predicted the end of the world will be. Loki, his offspring, and the giants will come together against the gods of Asgard who have gathered their own hoards of dead warriors in Valhalla. A great battle will take place, during which Asgard will be destroyed, along with Bifrost.

I won’t sugar-coat it. Most of the gods are destined to die in this great battle, including Odin, Freyr, Loki, and my personal favourite, Thor, among others. At least Thor is destined to kill Jörmungandr, the Midgard serpent, before he passes, although that is small consolation at times. The nine worlds will be set aflame and purged by blood and fire, after which, perhaps bittersweetly, a new world will emerge.

And there you have the crux of Norse myths and beliefs: everything is a circle. Everything that dies, is born again in time. In fact, Baldur himself, whose death was the catalyst for this event, is destined to rise from death and lead a new age of gods and men.

It is here that we leave our discussions on Norse mythology. Yes, it is a mythos filled with tragedy and suffering, however there is also great heroism as well. For our next lesson we shall travel slightly further west and begin our discussion on Celtic mythology. In the meantime, you have a quiz on today’s materials to complete. May the wisdom of Odin aid you in this and any classwork you endeavour to complete this day.

Students enrolling in our second year of Mythological studies will find themselves on a whirl-wind tour of Europe. We will study the myths of Greece and Rome, as well as those of the Norse and Celtic people. There will be a special emphasis on Muggle knowledge versus magical fact that will carry us throughout the year. Enroll