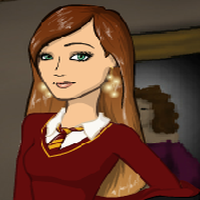 I first learned that I had an aptitude for magic when I was in the first grade. Growing up in an American Muggle family, I had no idea about the Wizarding world. However, I found that I was not sufficiently challenged in my Muggle classes, and would instead sneak off to the library section of the classroom, which contained the first part of Harry Potter’s biography. My friends and I, not realizing that the book was in fact non-fiction, would play at being wizards with sticks for wands. A few small accidents later I was sure that I was a witch. As I wished to continue my Muggle education, I did not attend Ilvermorny, but instead completed my studies before enrolling for a Magical education.

When my best friend and I received our Hogwarts letters in April 2014 we jumped at the chance to attend Hogwarts School of Witchcraft and Wizardry. My favorite classes are Charms, Transfiguration, and Defense Against the Dark Arts.

I would like to work in spell research for the Ministry upon graduating from Hogwarts and completing my NEWTS.
Accio Profile Posts...