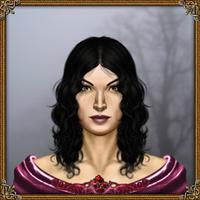 Mirabelle was an only-child who grew up in Ryde, a quaint seaside resort on the Isle of Wight. Her father, a Muggle, worked aboard the hovercraft, transporting people from her hometown over to the mainland. Her mother. a witch, worked in a shop in Diagon Alley. Although Mirabelle was aware of magic, her parents insisted she attend a Muggle primary school, as they believed she should have a good understanding of both worlds.

When Mirabelle attended Hogwarts, she was sorted into Gryffindor, unlike her mother who was a Hufflepuff. Mirabelle excelled at the theory-based subjects she pursued, but her wand work was average at best. She studied hard and passed all the necessary exams to graduate. Upon graduating, Mirabelle needed more adventure in her life and spent a few years travelling. Afterwards, she applied to work for the Ghoul Task Force where she was promptly accepted. She continued working for the Force, in a number of different roles, until a few years ago when she saw an opening as Ghoul Studies Professor at Hogwarts.

Mirabelle has always had a strange fascination with the more paranormal aspects of the magical world, particularly Ghosts, and in her spare time, she often reads up on the subject.