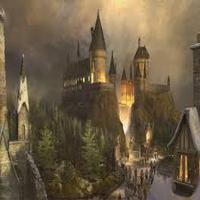 I was born on July 31st 1980 with my brother Harry. A year after we were born the dark lord Voldemort came to my house and killed my parents. He targeted Harry first but when he attacked with a spell it backfired leaving Harry alive and him gone. When Hagrid came he only found Harry, for I was unconscious in a pile of rubble. When the muggle police arrived they found me and I was in need of immediate medical attention. I was rushed to the hospital with a 50 50 chance of living, but I proved them wrong. After a few weeks in the hospital being nursed back to health I was taken to ms Kesey's orphanage for girls where I spent 10 long years...
Long story short I found out I was a witch and was taken to diagon alley where I bought my supplies with the help of a witch named Stephanie gumblbourph. On September 1st I went to hogwarts where I found out Harry was my twin and that I was an animagus. We went through many fun and terrifying adventures together along with hermione and Ron. Now I am a magizoologist with some fascinating pets and am working to become an auror for I am exceptionally good at charms/ dark arts/ etc.

BIO:
Full name: kaliey lily potter
House: gryffindor
Wand: English oak wood, Phoenix feather core, 10 3/4 inches, surprisingly swishy flexibility
Blood status: half-blood
Patronus: besgel
Birthday: July 31st 1980
Parents: lily and James potter
Significant other: koriias leviathan
Power: unregistered shapeshifter I am one of the first shapeshifters
Other abilities: good at quidditch, parseltounge ( like brother but got it from being distantly related by blood to Salazar slytherin which has been proven that Harry is related to him)
Nicknames: kal, kai, kay
Occupation: magizoologist, other classified
Siblings: Harry James Potter
-----------------------------------------------------------------------------------
Hello, my name is kaliey potter and i came from a diffrent universe where some people in the one i am now call it the dc universe. You are probably wondering how did i get here to this wizarding world and my answer will be.. its one of my special gifts. i can travel through the multiverse and i have done so for most of my life, but whats fascinating is that in each universe i go to some type of the other universe lives on. wether in a book, movie, picture, or imagination they live. I have been to a verse called the marvel universe and it is similar to where i came from, but one of my favorite universes is this one the wizarding world universe full of magic and muggles and new surprises. I have also been to quite i boring universe where there is no magic or powers just people. No aliens either, but what they do have is belief and even if they don't know it that universe is the universe that connects them all. i call it the center-verse. Each world that is created comes from this world this earth. for example the marvel world was created by an old guy named stan lee and once he put that in his mind boom a new universe was created. This means there are infinite worlds infinite universe all because of the center-verse. Now enough about that and more about me.i was born in the arrow verse or dc-verse. i was born with powers unlike another. i can turn into any creature known to man and mythical creatures which gives me their gifts aswell, and as i have already said i can jump verses. But there is a limit on my powers if i get hurt in any place that should cause death i can mend myself but my powers would be dampend and then my jumping verses can happen at random times and right now i happen to be stuck in this universe with no sense of how to get back. I have met many people on my travels and have been hunted a LOT and have been the one hunting. To the universes we and me are like a needle in a hay stack but does that stop me no, and does that stop others from trying to achieving it, no. So i have picked up a few skills in my life, like for example back on my earth i was trained to be an assassin for around 5 or more years i cant quite remember, but still i know how to fight. so don't get in my way.
-----------------------------------------------------------------------------------------
kaliey has had a lot of trauma in her life at such a young age, from her mother dying at kalieys birth and her father being shot dead by a group of bad guys when she was 5. she was only a few months old when her powers started to show so her dad kept her a secret but then when he died she was taken to an orphanage. There she had to suppress her powers which did not help as they grew stronger. One day she left the orphanage and got kidnapped by people who she later on would treat as family. Those people took her to a small island off the coast of Ireland to where for the next 10 years she was trained to be an assassin and to control her powers.

-------------------------------------------------------------------------------------------
kailey was born to Lillian and Luke potter on november 28th 2001. In 2007 kailey's parents were in a fatal car crash that killed her father and put her mother in a wheelchair. kailey went about her life not knowing the true secret as to why she couldn't remember the first 4 years of her life. it was only till a year ago when Lillian was on her death bed due to a year long fight from cancer did she reveal the truth about kalieys long lost past. (when kailey was born she was taken away because there was a unique difference in her DNA that no other human had. she was tested on but not much was found since she was not a fully developed human. only when she became older could they completely test her. When she was 2 there was a complication with one of the machines and instead of giving her a medicine it gave her an extremely rare metal. The metal combined with her DNA which would eventually make her able to control the metal and create anything her mind wanted practically.(with the amount of metal being the limitation). this is why her memory was wiped for she was too dangerous with it.) After her mothers death kailey was put into foster care because she was not yet old enough to live out on her own. she has to keep her powers a secret but one day she accidently reveals them when protecting someone and it causes her to get arrested and sent to a mental hospital for reasons......... and of course 2 of our many pets yeti and yuki