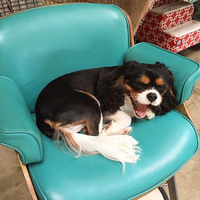 Having completed my third year, I am excited to join my fellow Ravenclaw fourth years in my newest batch of classes. In the muggle world, I have a bachelor's degree in English and Theatre as well as two master's degrees in Shakespeare and Renaissance Literature in performance. I suppose that one could say I am addicted to school, which only seems logical for a Ravenclaw. I have a sweet, one year old Cavalier King Charles Spaniel named Cedric Diggory and am married to a Hufflepuff named Thomas.

I am also a PA for History of Magic.

When on the roleplay section of HiH, I roleplay as Iden Otway.
Age: 17 - Occupation: Student (Summer Intern with Wizarding Britain's Only Alternative Salon)
Year at Hogwarts: Seventh year Hufflepuff
Orientation: Recently realized he is bisexual but has only told a couple people.
Birthplace: Godric's Hollow
Blood Status: Pureblood - Wand: Ash, Supple, 12 inches, Unicorn Hair
Pet: None - Patronus: A baby badger
Appearance/Background: Iden is tall at 6'2" and built broadly like many quidditch keepers, though he doesn't play. His hair is black and brushes his shoulders on one side, but the three inches above his right ear all the way to the nape of his neck are shaved into an undercut. The last inch of his hair is purple today, but that changes week to week. His lip is pierced with a ring on the left side as well as his right eyebrow. Overall, he looks like someone you wouldn't want to meet in a dark alley, but everyone who knows him knows that he is a teddy bear at heart. His dearest ambition is to become a wizarding tattoo artist, and he saves all of his Summer Internship money for the tattoo apprenticeship fee after he's done with Hogwarts. He has a younger brother who is a fifth year Ravenclaw, but they aren't close. His mum still lives in Godric's Hollow, and he has no clue where his dad is.
Accio Profile Posts...