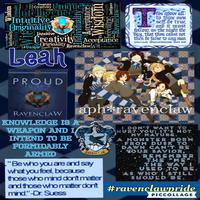 "When you have eliminated the impossible, whatever remains, however improbable, must be the truth." -Sir Arthur Conan Doyle
Followers (338)  Following (191)  Friends (163)

Leah has blue-green eyes, long, very curly, dirty blonde hair, with fringe coming down just above the eyebrows and two long pieces of hair framing the face. Her hair is typically kept up in a ponytail or a bun, though she tends to put it in braids before she goes to sleep. Her typical clothing consists of the usual Ravenclaw uniform when in class, and a black, mid-thigh length, pleated skirt, black tights, black, knee-high, boots with 1.5 inch heels, and a black turtleneck when out of class. She wears a pair of black framed glasses with rectangular-oval shaped lenses. She stands at an average height of 5'5". She has an ample chest and an hourglass figure. Her legs are slightly muscular, due to the Taekwondo and gymnastics.

Leah is an intelligent young woman, lending to her sorting into Ravenclaw, just like her father. She is compassionate and kind, especially to her children and fiance, whom she loves unconditionally. Due to her German heritage, she is very stubborn and strong-willed, traits which don't always serve her well. She is an introvert, preferring the company of herself, especially when she needs to wind down after a long day in the office. However, she will also seek out the company of her fiance and children when she feels extreme emotion.