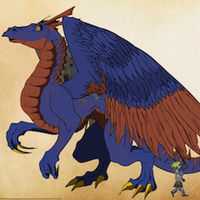 I own a spruce wood wand with a unicorn hair core, 10" and slightly springy in flexibility. The handle is smooth with a large, round nub at the base.
Followers (518)  Following (437)  Friends (428)

I am a 29 year old American witch and a former member of the United States Army; I served as a 31W, a member of the Military Police force with the task of isolating and containing magical mishaps until MACUSA-certified Aurors could get to the scene. I completed a No-Maj education and got a four year degree in Psychology before joining Hogwarts in May of 2014 to coax my magical abilities out of hibernation. In September of 2014, I married an amazing Hufflepuff boy. We live in Texas with our two cats. Our baby-dragon hatched in July of 2018.

Current Extracurricular Activities Include:
• Head Knight of the Knights of Librarium Book Club (formerly Club #31,687 and currently Group 262), which can now be found under "Official Clubs" at the HiH Student Lounge, on FaceBook, and in the main site's Group Directory
• Commentator for The Snitch Pitch (Group 2294) and the Slytherin Quidditch Team (Group 2341)
• Editor for the Logical Lists Project, which includes the Club Catalogue, Group Glossary, Dorm Directory (Unofficial), and Dorm Directory: Student Lounge Edition. All of these books can be found in the Hogwarts Library. Please be aware that the old Club Catalogue and Dorm Directory are no longer being updated now that the live chatting feature has returned to the main site. The Student Lounge Edition of the Dorm Directory is *On Hold* pending assessment of need, and the new Group Glossary is currently under construction
• Active member of the League of 42 (formerly Dorm #24,669 and now Group 21) since October 2014
• Member of the HiH Podcast Team since April 2015
• Y1 Charms PA as of April 2020