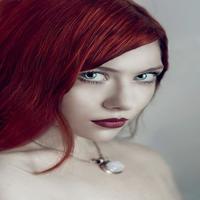 The only child of Benjamin and Annabelle Proctor, Octavia is a direct descendant of the Proctors of Salem. A high performing student during her childhood, Octavia enjoyed her studies and graduated from Hogwarts with straight O's in her courses. After her graduation, she took what is known as a 'gap year' to travel the magical and muggle world. While in this journey, she honed her talents as a Seer, specializing in the field of Arithmancy. Enjoying the finer things in life, Octavia often visits Muggle Cinemas to enjoy films and has also been known to visit musical festivals around the world.

In her Summer break, Octavia can be found assisting the Seers and Arithmancers based at the Ministry of Magic, where she is quite interested in the contents of the Hall of Prophecies.

A small witch, Professor Octavia Proctor stands at roughly 5 foot 3. With blood red hair and hazel eyes, she is rather slight in size and is sometimes mistaken for a student in large crowds. Famed for her decorative nail polish, Professor Proctor typically matches her nail colour to the colour of her robes as she hates when the two clash! A firm believer in a messy desk being the sign of creative genius, Octavia rather enjoys a good Firewhiskey and has an extensive collection of Chocolate frog cards.

Professor Octavia Proctor is excited to return to Hogwarts to teach Divination and Arithmancy. She can be found on Seventh Floor with her Tawny Owl, Columbia and her newly acquired Fruit bat, Bowie.