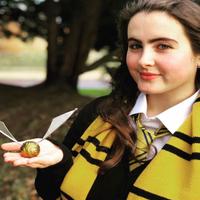 Name: Isabella Marion
Hufflepuff, a muggleborn. My great-great-grandfather on my mother's side was a wizard, but no one after him. Due to being a very good student it was hard for me to choose a profession, I graduated in 2014 and trained to become an Auror, the last year of studies was 2017.

Auror: 2017-2020. (Aged 21-24) Sadly after studying for three years and working for another three years as an Auror, I decided I wanted to change profession. I loved being an Auror, but I felt like there was something else for me out there.
Magizoologist: 2020-2031. (Aged 24-35). Being a Magizoologist was very exciting. I got to travel. Everywhere. But figured I would like to switch things up and stop traveling as often as it was very tiring. I wanted to still help in some way.
Healer trainee in St. Mungo's, Mediwitch: 2031-2038. (Aged 35-42). I trained for 6 months as I had previously passed all required exams at Hogwarts and then became a Mediwitch for some time. I even got to the point where I became a Healer-In-Charge but was then asked to become a Hogwarts Professor repeatedly throughout the years and finally said yes.
Hogwarts Professor of Care for Magical Creatures: 2038-2060. (Aged 42-60). I became a Hogwarts Professor and adored it for many many years. I decided to take a break to write a few novels.
Author (2060-).

Ancenstry: I have both Ravenclaws and Slytherins in my Ancenstry. There seems to be no Gryffindors or Hufflepuffs found. Nationality: British and Italian. Born in England, grew up in Italy until Hogwarts acceptance. Dad Italian, mother English.
Hogwarts House: Hufflepuff though the sorting hat was unsure if I were to be Gryffindor or Hufflepuff. I consider myself to be Hybrid Griffinpuff.
Ilvermorny: Thunderbird
Hogwarts student : 2007-2014
Dated a ex Gryffindor student 2015-2019.
Pet: Black cat called Harry. :) 2006-2020
Wand Criterias: Elm wood, Unicorn hair core, 11 ½" in length, Solid flexibility
My Patronus: Manx Cat