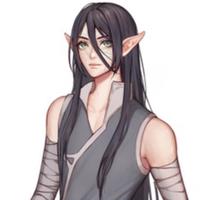 “Deep into that darkness peering, long I stood there wondering, fearing, Doubting, dreaming dreams no mortal ever dared to dream before” ~E.A.P.
Followers (2)  Following (4)  Friends (2)

❂Physical❂
Hair • Waist length, straight black locks with long bangs that often get in his face. Sometimes it's worn in a braid or up in a messy bun
Eyes • Teo has pale, mossy green eyes that are almond shaped
Facial Features • Thin, feminine features such as a slim nose, high cheekbones, easily flushed skin, and a sharp jawline have caused him to be mistaken for a woman.
Build • 6’2” and very lanky, but surprisingly strong, he’s lean and has got faintly defined muscle.
Skin • His skin is very pale and never tans, but does turn red very easily when he's flustered or embarrassed. On the other hand, when angry, his skin becomes even paler.

❂Habits/Quirks❂
Scarcely sleeps, smiles don't reach his eyes, accidentally sneaks up on people, flinches when initial contact is by someone else, always has dirty nails, unconsciously hums to himself

↫Conditions↬
Teo is an insomniac due to the night terrors that haunt him. When he does happen to get sleep, panic attacks can occur. He does have clinical depression and severe anxiety.

✧Relationships✧
Parents • Mother (witch) died giving birth, father (muggle) hated him for it and abused him until Teo made his escape by attending Hogwarts.
Siblings • None
Enemies • Father
Friends • Most of the professors at Hogwarts (Prof. Sprout, Prof. McGonagall, Madam Pomfrey)
Lover(s) • Not yet, too self conscious


During the school year, he’d stay all year round, roaming the castle and grounds on the holidays and helping Madam Pomfrey in the Hospital Wing. Even over the summer she would often allow him to stay at Hogwarts, helping the professors to get ready for the next school year. Thanks to magic, he was able to transition with no cost (with possibly a little help from McGonagall in the transfiguration). After he graduated, he remained at Hogwarts, working in the Hospital Wing for money. With that money, he started up his own clinic of sorts in Diagon Alley for injuries that were not so severe to require St. Mungo’s. While that is his main workshop, he travels from school to school, helping out. He also volunteers at St. Mungo’s and stays at Hogsmead when he wishes to visit Hogwarts again.


↫Roleplaying Rules↬
•Please, please, please use good grammar!!! No, “u” “gr8” “pls”! I get it if it’s OOC but other than that, just no.
•I don’t roleplay with asterisks (*).
•Write at least one paragraph, I don’t want any two sentence replies unless the situation calls for it.
•Don’t be OP. Only do what your character is physically and mentally capable of.
•No controlling my character unless it’s for small things (such as a handshake).
•I normally write in third person, I can do present and past tense. I’m very flexible though, so really I’m good with whatever you want in that area (not really a rule but okie dokie).
•I am willing to do fandomverses but I won’t play as characters from the fandom
•I mostly do fantasy, romance, and modern RPs but I’m open to almost anything.
•If you get bored with the roleplay, don't just leave. Please let me know, I won't be upset, I just don't want to be waiting for you to respond for weeks.
•If any specific things trigger/upset/offend you then let me know. I don't get upset by anything specific.
•Any characters other than our main are usually controllable by both players.
Followers (2)