The walls are red with white patterns lining the corners and archways of the Alchemy classroom today.  Yellow curtains are pulled back from the windows and doorways.  There is a patterned rug in front of Professor Rosenquist’s desk.  On the desk itself is a small collection of brass statues depicting Indian deities.  Students find that their normal chairs are back, however, there is a small throw pillow sitting in each seat.

“I would like to send you a warm welcome from the country of India this week!  Today we will be taking a completely different turn from what we have already covered so far this year.  The past three lessons discussed alchemy across different cultures that chronologically led up to its exposure in Europe.  Today we will begin taking a detour that will last for the next three lessons before we continue back on our trip towards Western alchemy.  Sometimes it’s good to be spontaneous.  Like...right now!  Let’s go!”

While Alexandria was a center of alchemical learning and Eastern alchemists were indeed inspired by the Alexandrians’ writings, alchemy in China and India already existed centuries before the city was even built.  Eastern alchemy does not predate ancient Egyptian alchemy, however, it was formed without any influence from the Egyptians.

There are also texts written in Sanskrit that mention the Elixir of Life as well as other alchemical methods that date back to around 1000 B.C.E.  Industrial developments were far advanced for their time and India was looked up to as being one of the most skilled nations.  Indian alchemy in particular reached its height around 900 C.E. to 1300 C.E.  Alchemists had perfected many laboratory processes, from calcination and distillation to producing light without heat.  They could skillfully temper steel way before Europe even knew how.  They could also identify metals based on the flame color while burning as well.

Around 1100 C.E., Indian alchemists began to focus less on practical operations and preferred spiritual techniques for an inner transformation.  Certain metals were assigned different parts of the human body and alchemists sought purified essences within.  Indian alchemists focused on accumulating life force, otherwise known as Kundalini.  Kundalini is a primal serpent of energy found at the base of the spine.  Awakening the Kundalini is seen as one of the main goals of Indian alchemy, as it’s one of the many ways to reach enlightenment.  The Kundalini is dormant within all of us, coiled and ready to be awoken.  When you wake it, it rises up our spine, vertebrae by vertebrae, until it reaches the brain.  As the Kundalini rises, it passes through lunar bodies and awakens our spinal chakras along the way.

In order to awaken the Kundalini, we look towards yogic theory.  While admittedly I am not a yoga master in the slightest, many systems of yoga explain and guide you towards awakening the Kundalini.  Some prefer to focus on methods such as meditation and chanting mantras.  Others suggest practicing asana.  Asana is a term in yoga that refers to the posture that the practitioner sits in as well as the location.  It also refers to the yoga positions that people generally think about when practicing yoga.

One method in particular that I find helps with not only awakening the Kundalini but also with our ability to conduct magic is Pranayama.  Pranayama is the control and usage of your breath as an extension of your life force.  Doing breathing exercises for a minute can actually change your mood dramatically.  When you practice Pranayama, you are manipulating your vital energy.  Of course, intentional breath work for thirty seconds isn’t going to awaken the Kundalini, but you can build your way up to that goal.  Pranayama can help relieve asthma symptoms and is also used to treat anxiety and depression.  Practicing Pranayama also has magical benefits.  When doing the right exercises, you will feel lighter and it will be easier to concentrate and channel your magic when casting spells.  Today I will be teaching an exercise that I have found really helps my magic as well as my own spiritual practices.

Nadi Shodhana, or alternate nostril breathing, is used to clear and calm the mind.  By keeping your mind clear of extra emotions and thoughts, you will find it easier to focus.  Find a spot on either the floor or wherever you feel comfortable to sit in a traditional cross-legged meditation pose.  Make sure you are sitting up and relaxing your face as well as your shoulders.

Start with your thumb closing off your right nostril and slowly inhale through the left while counting up to either four, six, or eight seconds.  After inhaling, hold in the breath for the same amount of time.  Remove your thumb off of your nose and close off your left nostril with your ring finger, then exhale through the right.  Inhale through the right, hold in the breath, and then exhale back through the left.  That’s one full cycle of Nadi Shodhana.  Repeat this process around four or five more times.  If you’re just beginning, I would definitely go with counting up to four seconds and fewer cycles.  It’s alright to switch hands if your hands are tired as long as you form the Vishnu Mudra again.  Remember to focus on your breathing and feeling the energy run through you.

The saddest thing about Indian alchemy is that all that remains today is a branch called Rasayana and traditions around the Tamil communities in Southern India.  In particular, I would like to look at the Southern Indian Tamil Siddhar tradition.  The Siddhars were people who wandered around and dominated Tamil, teaching and philosophy in ancient India.  They presented themselves as mystics, doctors, yoga masters, and alchemists all at once.  Instead of having their sights set on the transmutation of gold, they stressed accomplishing extended longevity or immortality of the physical body through a concept they called the glorified body.  Tamil Siddhars claim and trace their lineage back to an ancient civilization that was destroyed by a great flood from approximately 10,000 years ago.  This land supposedly stretched from Madagascar to Australia with Sri Lanka located somewhere in the central part of the land mass.

Our Alchemist Spotlight today features someone more recent.  Arutprakasa Vallalar Chidambaram Ramalingam, more commonly known as Vallalar, is one of the most famous Tamil saints to date and belongs in a long line of gnana (higher wisdom) siddhars.  He’s also one of the greatest Tamil poets from the 19th century, composing around 5,818 poems about universal love and peace.  He was strongly against the caste system of India and preached about its negative effects on society.  Vallalar taught that feeding the poor was the highest form of worship, and he even opened up a center similar to a soup kitchen in 1867.

What’s interesting about Vallalar was that he discovered a way to immortalize his physical body.  This was done in a total of three transformations.  The first transformation was that he transformed his normal human body into the Perfect Body.  This Perfect Body essentially made him impervious to any ailments, immortal, and gave him the ability to be omnipresent, omniscient, and omnipotent. 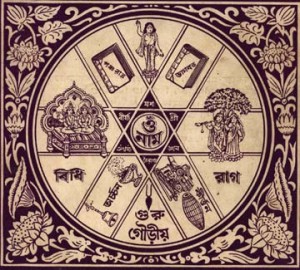 Vallalar’s second transformation changed his Perfect Body into the Grace Body.  This guy was essentially immortal already, what’s better than that?  Well, the Grace Body granted Vallalar a youthful, childlike appearance, the ability to only be seen but not touched, and complete control of all the Siddhis.  Siddhis are magical powers that are attained through spiritual practices such as meditation and yoga.  They can range anywhere from being able to see things far away to possessing absolute lordship.

The third transformation was his Grace Body transforming into the Bliss Body.  The Bliss Body is essentially the body of a god and is omnipresent but can’t be perceived at all by any of the five senses.  These three transformations proved that you don’t need death to receive the ultimate spiritual experience, as Vallalar did this with his physical body while alive.

In 1874, Vallalar disappeared at age 50.  He had a one room residence in Mettukuppam.  When he gave his last lecture in 1873, he asked his audience to meditate on his lighted lamp, which he placed outside.  On January 30, 1874, Vallalar locked himself in his residence and told his followers not to open the door.  If they did open the door, they would find nothing.  The government forcefully entered the one room residence in May, only to find it completely empty with no clues of Vallalar’s whereabouts.  Followers believe Vallalar is still alive among us to this day.

Well, wasn’t that fun?  I hope you will leave today feeling somewhat enlightened.  Be sure to practice that Nadi Shodhana exercise I taught you if you’re feeling stressed while studying for your midterms, which, by the way, are next week!  It’s hard to imagine we’re already at the halfway point, isn’t it?

I do need to leave right away for an important meeting, however, you can still stay behind to look at the artifacts in the back as per usual.  My head student will be here to supervise while I am gone.  Class dismissed!