To any confused students:

With my Professor Morgan's recent retirement, there may be some slightly confusing references to her in the lesson. I solely serve as the temporary steward for this course as I am well versed in many of its topics. In the meantime, you may see some of the references disappear in order to diminish the amount of work the new professor will need to do.

If interested and qualified, see the application for the position here: https://forms.gle/RYQLGcCwmwWzPAZi7

Professor Morgan stands at the front of the classroom dressed in a long, billowing green cloak. Instead of her usual wand, she firmly grasps a gnarled staff. The staff oozes with ancient magic and the emerald ensconced at the top of the staff glows slightly, mirroring the colour of Morgan’s eyes. Beside her, Professor Stevens sits on the edge of the desk. Her smile is one full of knowledge and mirth as she beckons to the class to take their seats. Professor Morgan sets the staff down and begins the class.

Do you like the outfit? My family has always had a bit of a flair for the dramatic - including our Norse ancestors. Yes, my family is at least partially descended from the Norse, hence the hair, and this cloak and staff are family heirlooms passed down to the seventh child in the family.

No - no touching the staff. It has been used to focus magic by members of my family for generations, and I’m not entirely sure what would happen if someone from outside of the bloodline were to touch it. Best be on the safe side after that scroll incident, wouldn’t you say?

We have a few more things to cover in respect to Norse magic. Last class we spoke about Sei∂r, the type of magic practiced by the Volur, which used primarily incantations within their songs for magical practice. Today I have brought in Mathilda Stevens, former professor of Ancient Runes here at Hogwarts, to speak about the use of runes in Norse magic. Please give her your complete attention, as you will be tested on all of the material that she presents to you.

Hello everyone, and thank you, Professor Morgan, for inviting me today. The subject I used to teach here at Hogwarts, Ancient Runes, is named after a writing system created by the Germanic people who were the ancestors of the Norse people you have been studying this year, and then further developed by various tribes, including the Norse people.

The word “rune“, plural “runes“, is derived from the Old English word “run” (pronounced something like “roon”), which refers to a mystery or secret, and similar etymologies (that is, histories of word origin) can be found for the related words in other Germanic languages. It could thus be said that the Germanic runes are the original magic writing system (also referred to as script) of European magic! At the very least, they are the first one recognised as such by European wizardkind, although we now recognise that other cultures developed their own magical scripts much earlier.

The exact origins of the Germanic runes (from here on in simply referred to as “runes” to make matters easier) are unclear, but we do know that they first appeared in Europe towards the end of the second century CE. Over the next three centuries, they spread throughout the area populated by Germanic tribes. During this period, the so-called Elder Futhark became the standard version of the script.

The term “Futhark” is similar to our term “alphabet” (which is derived from the first two letters of the Greek script, alpha and beta) or indeed the reference to our own script as the “ABC”, in that it combines the sounds or letterforms of the first symbols of the script.

The Elder Futhark was in use across much of Europe north of the Alps from around 200 to 700 C.E. Towards the end of this period, changes to the languages in different geographical areas also affected the use of the script, so that from about 700 onwards, we generally speak of two new variants of the runes, the Younger Futhark (YF) in modern day Scandinavia (the land of the Norse people) and the Anglo-Saxon Futhork (ASF) in Frisia (Northern Germany) and the British Isles. These younger scripts remained in use for much of the Middle Ages: the ASF was eventually replaced by the Roman script (the alphabet we still use today and which you are currently using) towards the end of the 12th century, while the YF continued to be used in Scandinavia (though mostly for decorative purposes) until the 19th century.

The first magical use of runes we can find is in the form of amulets for protection and inscriptions on weapons, intended to give strength and victory to the owner. Each rune of the Elder Futhark has a name, and these names link them to their magical potential. While the runes of the Elder Futhark fell out of everyday use by the 8th century, their magical potential was such that they continued to be used by the magical community for several centuries, until the rapid changes of the Renaissance and Reformation finally pushed them towards the brink of extinction. If it hadn’t been for the work of Sofia Schreiber, who standardised our understanding of the magical powers of the runes, we may not even be aware of their magical potential now.

Another use of the runes that continues to this day is the use of the Elder Futhark runes in divination. Now, I am sure you will learn about this in more detail from your divination professor, so I will for the moment limit myself to say that this use of the runes has been practiced since the dawn of runic writing, and that it continues to use the main meanings of the runes as passed down from the time of the ancient Germanic tribes.

Besides the use of the Elder Futhark runes in charms for protection and similar forms of enhancing spellwork, the runes of the Anglo-Saxon Futhork and particularly the Younger Futhark were also used as a means to record information on spells, charms, rituals and potions. These texts became endangered when the Norse countries became Christianised during the Middle Ages, so the ancient Norse wizards, known as the Nordic Magi, gave their tomes of magical lore to Rowena Ravenclaw for safekeeping.

So if you want to learn more about ancient Norse magic, come to Ancient Runes and learn to read the runes so that you can, if you are careful, study these ancient texts for yourself.

Thank you, Mathilda, for your time. It is so good to have you visit us here at the castle again!

Before we conclude our discussion on the Norse people, there are a few famous Norse magical practitioners I would like to introduce you to - well, at least to their stories. 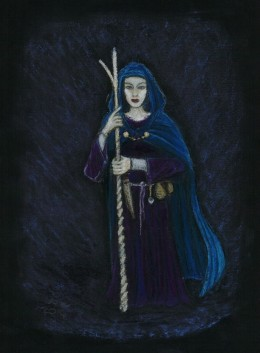 One of the greatest tales passed down through the generations of the Norse people is that of Erik the Red. Erik the Red - and, in turn, his son Leif Erikson - were some of the greatest explorers of the Viking Age. Erik the Red - after being banished from the homeland - was the first man to bring the Norse people to Greenland, via Iceland. Leif is credited with bringing the Norse to North America - Newfoundland in modern day Canada - five centuries before Christopher Columbus “discovered” America.

Wherever the Norse went, so too did the Volur, as their wisdom and magic was depended on for survival. When reading the Saga of Erik the Red, an entire chapter is devoted to the arrival of the Völva Thorbjǫrg. The settlement in question had suffered through famine due to failing crops, and disease had also claimed many lives, and the leaders were seeking a glimpse of the future - would they live or die?

The story continues to explain how gracious and respectful the hosts were to Thorbjǫrg. Even during a time of famine she was given a feast and had her every need attended to. This testament to the respect the Volur were given reinforces how critical their services were to the Norse people. Thankfully, using her divinatory powers, Thorbjǫrg was able to reassure the settlement that the famine was at an end. The next season of crops would be successful, and they would thrive.

An interesting sideline to the story is Thorbjǫrg’s reference to the spirits who witnessed the divination ritual (a song/dance performed with a local named Gudrid) and their pleasure over the ritual allowed Thorbjǫrg to see into the future more clearly. This reference is another example of how the Völva were seen as intermediaries between the human and spirit world.

So what really happened from a magical standpoint? Thorbjǫrg did indeed use divination to see into the future of the settlement and knew that they would survive. The reference to “spirits”, however, was most likely in regards to some sort of magical pest that was damaging the crops, which Thorbjǫrg in turn exterminated or relocated.

The Saga of Örvar-Oddr

The saga of Örvar-Oddr depicts another Völva, albeit an unnamed one, who used divination to predict the death of the titular hero. She told the hero that he would one day be killed by his horse. Terrified by this prospect and determined to avoid his fate, the hero killed his horse and fled his homeland. After his many adventures, Örvar-Oddr became sentimental and returned home. While strolling through the countryside, he tripped over the skull of his horse, hit his head, and died.

Whether this story is a true recounting of an actual event or whether it is a fable is not entirely clear. What it does demonstrate, however, is one of the basic tenets of Sei∂r - only the Volur are able to change the weave of destiny - a common man, no matter how heroic, cannot avoid his fate.

Now please do not feel sorry for dear Örvar-Oddr - the Völva predicted that he would not die until he was 300 years old, and that is what came to pass. Örvar-Oddr either used or was subjected to the effect of several other magical incidences  - much of it runic in nature - during the rest of the saga, but true or not, it does give us an idea of the skills that the Volur achieved in their time.

And that concludes both our lecture for today as well as our discussion on the Norse people. Next class is our final class for Year Four - I can hardly believe it - and we will discuss a few more interesting points from ancient Europe. Until then, enjoy today’s quiz, and start reviewing for your finals!

Our studies of magic use in ancient civilizations continues this year with our examination of several European groups, including the ancient Romans, Greeks, Celts, Norse, and more! It will be a year filled with curious enigmas and amusing occurrences.
Course Prerequisites: