Lesson 5) The Symbolism of Hermeticism

Hello hello! I hope you are all ready for your midterms today! As I mentioned last week, the midterm will not include the information taught in today's lesson. That being said, I won't bog you down with too much information right before your midterm. We will be going over more symbolism today. Let's get started!

Birds are very important in alchemy. You'll see them often in treatises or drawings, so being able to identify them is crucial to understanding any sort of document. Some of these birds were briefly mentioned in Lesson Two in relation to the phases of the Great Work. There are a total of five common birds used in Hermetic alchemy.

The first of these birds is the raven, sometimes also called the black crow in alchemy. As you should know, the raven primarily symbolizes the Nigredo stage. It's also of no surprise that it is associated with death, as you are pushing out the physical world and stepping into the inner world of darkness. It's a death of your former self and a birth of your enlightened self. You may have also seen the raven or crow symbolize death in other fields, such as literature and art. The raven can also mean stepping out of the physical restrictions our body sets up on its own, and a withdrawal from something, whether emotionally or physically.

The white swan is a representation of the Albedo stage. You start to see a bright light during this stage, right? Let's go more into detail about what exactly this light is. This bright light is often mistaken for true illumination. That's not necessarily the case. If it was, why would there be more stages of the Great Work after Albedo? This light is actually the first conscious moment of your encounter with the etheric world. It's overwhelming to the soul as it's an experience that goes beyond the physical sense, so it is often seen as a bright light. So why would a swan be suitable to use as a symbol for Albedo? The swan is rarely ever seen in flight, but instead is usually seen swimming gracefully in water. Alchemists picture the water's surface as the surface of the soul. The swan swimming in the water symbolizes the interaction of the etheric (swan) with the physical (water).

The peacock in particular is quite peculiar. It represents the alchemist entering an inner experience of the astral world. What's interesting is that the bird itself isn't a well known symbol, but instead its tail is found more often in documents. Entering the astral world with your inner self is said to appear as shifting colors and patterns, almost iridescent even. These colors are represented in the peacock's tail feather. The flashing colors of this experience can even fool some alchemists into thinking they have achieved enlightenment. Obviously, that isn't the case, but nevertheless this is the turning point of the Great Work in a five stage process.

Out of all birds, would you expect the pelican to be important to alchemy? Typically the pelican is shown stabbing itself in the breast with its beak so it can feed its young with its blood. It's not exactly the most heartwarming image. However, it is symbolic of the alchemist having a sacrificial relationship with his own being. Like how the pelican nourishes the babies with a substance from its own body, the alchemist must nourish and develop his inner self with his own soul force. In order t

o develop your spiritual self, you must change and sacrifice the image of yourself. This experience is said to be deeply painful as it does test your inner resources, such as your mind. However, your spiritual self will emerge completely transformed after this experience. The pelican can also refer to a distillation tool (pictured to the right), which resembles the pelican symbol. 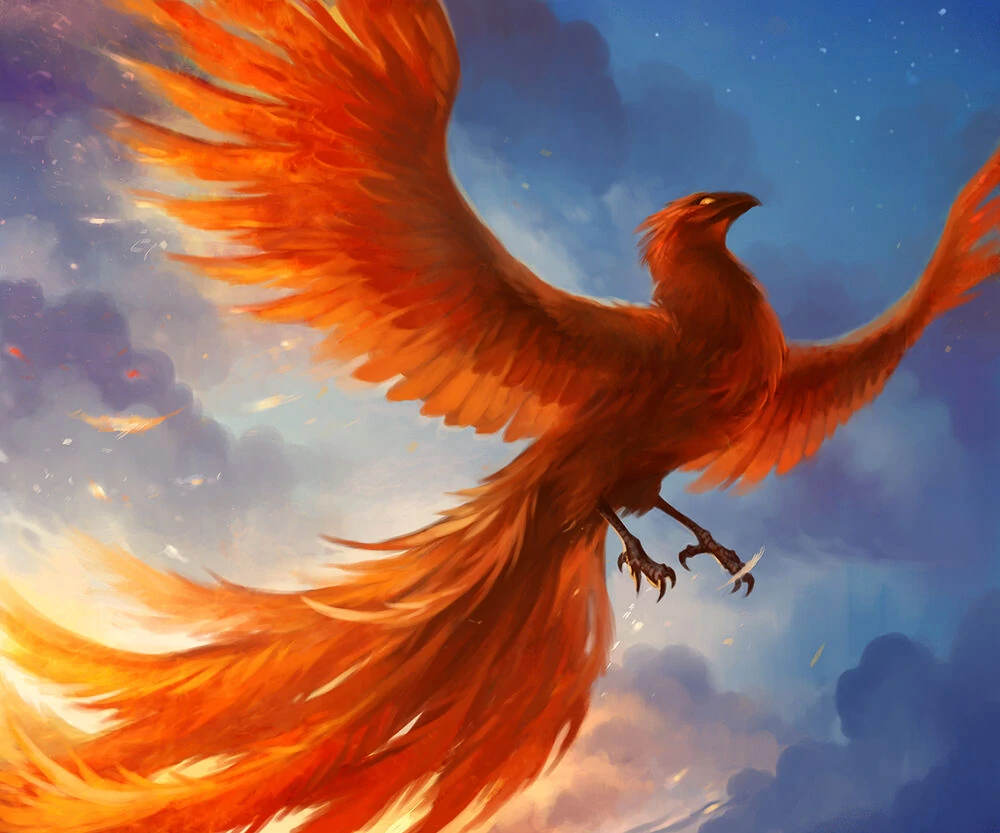 Phoenixes represent the Rubedo stage of the Great Work. This is the completion of soul development and transformation. When a phoenix builds its myrrh twig nest, that means it will ignite soon. After it goes up in flames, a baby phoenix rises out of the ashes. Alchemists take this process and look at it in a spiritual perspective. When the alchemist going through the Great Work has integrated his being beyond a certain point, he no longer needs to be dependent on his physical body as a foundation for his being. His spiritual sureness is stable enough for him to stand. He has obtained the Philosopher's Stone, which in this sense isn't an actual stone, but instead the spiritual core of his being. His soul is completely freed from the boundaries of his physical body.

The Great Work? Again? Yep! If you haven't guessed it by now, alchemists like to split up the Great Work by using these birds as phases in this order: Black Crow, White Swan, Peacock, Pelican, and Phoenix. Sometimes, if you go outside early enough in the morning, you will see dew on the ground. In some alchemical manuscripts, there are depictions of people gathering this dew. Some people took this in a literal sense and believed that the dew needed to be collected with clean sheets and wrung out into a container, which would in turn be used for distillation. There is also an old myth that morning dew has rejuvenating powers. It's said that young women would go into the meadows and put dew on their bodies to stay young and beautiful. Obviously, rubbing dew on yourself isn't going to make you immortal, but dew is used frequently in alchemical elixirs that are intended to increase longevity.

In Hermetic alchemy, this action of gathering dew is allegorical. When you slip into your inner self through spiritual practices, you encounter finer energies. The finer energies seep into your awareness during meditation. This seeping is similar to how morning dew precipitates and gathers on the grass. The dew itself is symbolic of the matter (the substance that needs to be worked on) of the Great Work.

I find dragons to be magnificent beasts. My father is a dragonologist himself, and I fondly remember going to see the dragon reserve occasionally as a child. Dragons are a popular symbol found in alchemical art. They also symbolize the matter of the Great Work, or in other words, yourself. We think of dragons as these powerful, dangerous beasts that are known wizard killers. Alchemists look at dragons in a different perspective. As dragons are creatures, they are symbolic of the lower, animalistic nature of man. Why specifically a dragon? Most speculate that it's because the dragon is a wild, untamed creature which can be comparable to untamed human emotions. It's also representative of the Earth, as well as the body. Metaphorically, the dragon needs to be killed so the body can enter a stage of putrefaction. Basically, that means you're coming into contact with this lower animalistic nature within yourself to transform it. 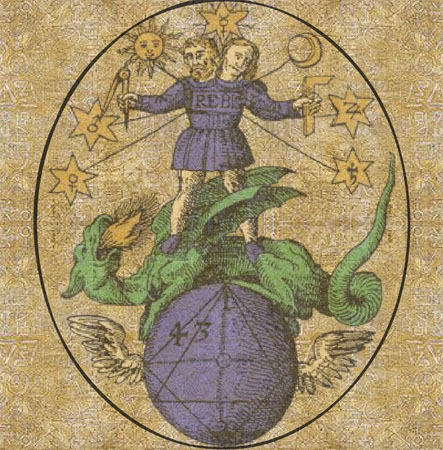 Rebis is quite a strange character at first glance. It's described as a two-headed figure who is both male and female. The Rebis is a product of the union of the Red King (the Sun) and the White Queen (the Moon). The Red King and the White Queen are allegories of masculinity and femininity, uniting together to form a greater unified product (Rebis). This union of opposites is known as the chemical marriage. The Rebis itself is a symbol of the end product of the Great Work. After going through putrefaction and purification, and then separating opposing qualities, these qualities unite into a reconciliation of spirit and matter.

The Rebis is often shown holding two items. The left object is typically a compass. As you may know already, compasses are used to aid in drawing circles. In alchemy, circles are linked with the divine. Also, because the compass is on the left side, it's held by the male half, which represents spiritual qualities. On the right side, the female arm is holding a tool called a square, which helps measure right angles. Squares in alchemy, along with femininity, are associated with the material world, the matter. There are other various drawings of the Rebis that you can find. Some include planetary symbols surrounding Rebis, while others may have numerological references. I've even seen some variations where Rebis is holding snakes instead of tools. In this particular picture of Rebis, notice that they are standing on a dragon. As we mentioned previously, dragons symbolize the matter of the Great Work. Rebis standing on the dragon is a direct metaphor for overcoming the matter to complete the Great Work. This depiction is very common, however in other variations they may be standing on a crescent moon or some other platform instead.

That's all for today! Be sure that you're ready before you take your midterm. There is no time limit so take as long as you need to. Good luck!

Also your second transmutation log is due next week, so make sure that you're keeping up with your project. If you have already passed the middle portion of your transmutation, that's completely fine. Just make sure to turn in what you documented for your lab time then.