Lesson 9) The Fiery King and the Snow Queen

Good day to all of you! Today is a special day as you all may know as it's our last lesson together in Alchemy 401! I would like to take a moment to say that it's been an absolute joy to explore Hermetic alchemy with all of you and I do hope you consider taking Alchemy next year. We will proceed with a mini lecture today followed by your final. Let's get started so you have the rest of the time for your test. 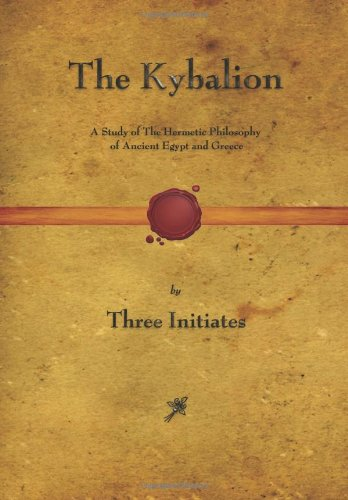 The Kybalion is a text published in 1912 by a group of alchemists called the Three Initiates. It details the Hermetic philosophy of mental transmutation (which is basically the Great Work) and is notable for listing the Seven Hermetic Principles. Although it claims that it's based on early or ancient Hermeticism, it does incorporate some modern concepts. This is important because everything changes over time, even alchemy! The Seven Hermetic Principles sum up Hermeticism quite well, which I find to be perfect for a finale on this chapter of Alchemy.

The first principle is the Principle of Mentalism. This states that the "All is Mind." What does that even mean? We briefly mentioned One Mind and One Thing two lessons ago when we were deciphering the emblem depicting the Emerald Tablet. The One Thing or the All is the substantial reality that lies underneath the material world. In other words, it's the essence, the energy, the matter, and the spirit of our universe. This principle is stating that the One Thing can be thought of as an infinite, universal, living mind. It also implies that our universe is a mental creation of the One Thing and that our universe where we move, live, and breath exists within the Mind of the One Thing. The Principle of Correspondence explains that there is always a correspondence between the laws and phenomena amid the various planes. This is essentially a way to describe an old Hermetic axiom, "as above, so below; as below, so above." The As Above, So Below axiom states that the Below corresponds to the Above and vice versa in order to accomplish the miracle of the One Thing. That miracle is the Great Work. The Principle of Correspondence is considered a universal law as well as one of the most important principles by ancient Hermetists. There are three main planes within our universe: the Great Physical Plane, the Great Mental Plane, and the Great Spiritual Plane. While we understand the physical plane, the mental and spiritual planes are shrouded in mystery. By using this principle, we are able to comprehend more about these planes that would otherwise be completely unknown.

The Principle of Vibration, the third principle, states that everything is in motion and that nothing is at rest. These are facts endorsed by modern Muggle sciences and which they continue to verify. The interesting thing is that this principle was created thousands of years ago by the alchemists in ancient Egypt! The Principle of Vibration explains that matter, energy, mind, and spirit are essentially the same thing; however, how they manifest in the universe is determined by different vibrations. Everything is in a vibratory motion. The higher the vibration, the higher on the scale it is. The One Thing is said to be at an infinite level of vibration; it's going so fast that it appears to be motionless. On the other end of the scale is the grossest matter that is said to vibrate so slow that it seems to be at rest. In between, there are millions of various degrees of vibrations. The Principle of Polarity consists of a couple of Hermetic axioms such as "everything is dual"; "everything has its pair of opposites"; and "everything has two poles." It means exactly what you would think it would mean; in everything there are two opposite aspects. The opposites are actually the two extremes of the same thing, with several varying degrees in between. The easiest example of this would be hot and cold. If you think about it, they're essentially the same thing, temperature, but what makes them different is varying degrees. Absolute hot and absolute cold don't exist. If you look at a thermometer, can you pinpoint where hot or cold truly begins? Most likely not. Even if you could, temperature is relative to everyone individually. For example, I could find 15 ºC (approx. 60 ºF) to be slightly chilly, yet someone else would think it's the perfect temperature. This principle applies to pretty much any polar opposites, such as light and dark, love and hate, high and low, loud and quiet, etc.

The fifth principle on the list is the Principle of Rhythm. This states that there is a pendulum-like "to and fro" motion between the polar opposites established in the previous principle. There is a constant transition from one pole to the other and there's also a rhythm to this movement. This principle is universal as it's applied to anything with polar opposites, which is everything. Wherever there is an action, the pendulum swings back towards the reaction. This leads us up to our next principle.

The Principle of Cause and Effect explains the fact that for every effect there is a cause, and every cause has an effect. This erases the existence of chance and states that nothing "merely happens." Chance is considered by Hermetists to be a term used to indicate actual causes that weren't recognized or perceived. It's pretty simple to understand. For example, the student in the back row (Yes Mister Smith, I'm talking about you) just knocked his quill on the floor. This happened because he took a break from taking notes to yawn, setting down his quill. In the movement of his arms during the yawn, he knocked the quill off his desk. And now he is trying to hide behind his notebook because I am using him as an example. All jokes aside, the series of actions he took are a chain of causes and effects linked together. Think of it as the domino effect. Last but not least, the final principle is the Principle of Gender. Gender is manifested in everything as masculine and feminine elements on all planes. This isn't referring to the physical gender of a person, but rather a mental gender. Does a mental gender have to match up to a physical gender? No, it doesn't. Every male contains the female element while every female contains the male element. This particular principle stresses that there needs to be a balance of masculinity and femininity within everyone. We need the two genders to be in a constant balance so that they can work in conjunction. This cooperation breeds success.

The Principle of Gender brings up an important alchemical concept known as the Sacred Marriage. This is depicted as the marriage of the Red King and the White Queen to make the Philosopher's Child (Rebis). This is the combination of opposites (the Sun and the Moon, soul and spirit, fire and water) to make something much greater. This takes the opposing forces within someone and unites them. It's a crucial turning point in your own personal transformation through the Great Work, as you are uniting your own soul and spirit to produce a new empowered presence. Conjunction is what we experience in the communion we feel with nature and when we fall in love. However, when it deals with the essences of the soul and spirit within us, conjunction becomes the Sacred Marriage.

As I mentioned in the previous lesson, the final is not cumulative and will only cover material from Lesson Five up through today's lesson. Take a bit of time to review past material as well as today's content before opening the test. I wish you all good luck and I hope to see you in your seats next year!