Our sisters to the west! For the next week, we will be talking about basic ancient history of the Americas. We will mainly be covering North America and Central America, however we will go down into the south when talking about the Clovis culture. Let's begin! 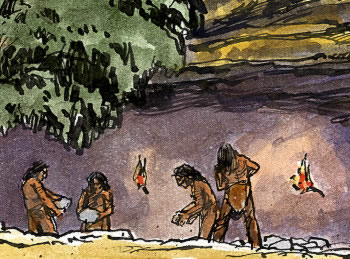 In 1933, archaeologists named the people who first came to America the "Clovis." The original term for these people was the Kaia-Vaha according to magihistorians like Utoipius Black. However, in 1935, at a large wizarding history conference in Vienna, wizardkind decided to remove the name Kaia-Vaha and side with the Muggles in their naming these people "the Clovis." This was an attempt to link Muggles’ and wizardkind’s recording of history and to minimize confusion in the future.

The picture you see above is a drawing of the Clovis people working in a cave and moving stone together. It is called "The Va Oua" by magihistorians. Though many Muggles believe this cave drawing to be non-magical, it contains a fair amount of insight into magic in this period and region.

First, we can see two birds that look strangely familiar. That's because they are phoenixes. It is believed by some that the Clovis, who would have originated from somewhere in modern day India or Egypt, brought these birds with them for their healing powers and their ability to function as winged beasts of burden. We can also see them laying out stone work, which many have theorized to be an early form of protective enchantment that they used to ward off bad spirits.

At this time in history, Muggles and magical kind lived side by side. Many of the witches and wizards were held in high esteem. This is partly because of how helpful wizard-kind was to their Muggle brethren. Many of the wizards and witches would hunt megafauna, extremely large animals such as woolly mammoths, a feat which was significantly more difficult for Muggles since they had no magic with which to hunt these ferocious beasts. However, witches and wizards would often share their big game with Muggles, allowing them to survive in times when they could have died out. Not only did they share their game with Muggles, but they also taught them how to use every part of an animal, such as taking the tusks from a woolly mammoth and creating weapons from them.

The Clovis were present all throughout the Americas, but died out during what was known as The Mass Cooling. This was a climatic change that caused severe hardship for many of the culture’s non-magical people. While witches and wizards could use Warming Charms, many Muggles died of hypothermia.

Next, we will be talking about the Olmec people. This culture is vastly important because it is unlike anything we have seen yet. Prior to the Olmec, all other civilizations that lived in the Americas were group-oriented. Not one person stood out, and there was no specific chain of command in place. In the Olmec culture, we will see the first use of hierarchy. This is the system in which people order themselves according to authority. In the Olmec civilization, witches and wizards made up the first two "classes" of society: the rulers and the shamans. This was just above the Muggle priests, while artisans, laborers, and farmers were further beneath them.

At this time, it was believed that rulers were representatives of the gods, so when a young wizard showed their power, it seemed natural that they would be one of the next rulers. In a later year we will discuss the influences of magic on ancient religions and this will come up, but it is important to note how and why wizards were so important in this culture.

The Olmec were also the creators of The Great Pyramid. Often when thinking of The Great Pyramid people think of those in Egypt, however this pyramid is located in the pre-Columbian (or pre-historical American), archaeological site of La Venta, in Tabasco, Mexico. This was one of the most impressive Muggle-magical works of the Olmec civilization and still stands today (as seen in the photograph). The other well known artifacts of the Olmec people are their giant heads, which also still stand today.

These statues, known as "colossal heads," can still be found today in places like La Venta, or at the Villahermosa Magical Excavation Museum. They are another monument to the abilities of magical and Muggle collaboration.  While wizards and witches would move the stone and enchant it, the Muggle artisans would carve and craft the stone to create the remarkable statues we see today. 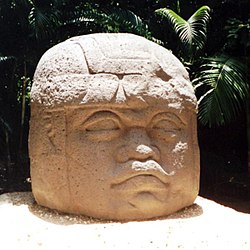 Finally, we move on to the Maya civilization. This is a second group of Mesoamerican peoples who lived roughly around the same time as the Olmec did, though they lasted longer. While the Olmec thrived in Mexico and parts of South America, the Maya lived in Central America and southern regions of modern day Mexico. The "early" block and the "middle" block of Maya history are both considered pre-classical, which spans a period from 2,000 BCE to 300 BCE. Though there is more to Maya history than just the pre-classical portion (the full history of the entire culture stretches all the way to 250 CE), we will only be mentioning the pre-classical block today.

The Maya were, again, some of the first people to form village-oriented lifestyles as opposed to nomadic tribes. Witches and wizards learned to plant food, making it easier for them to settle down. It was quite the feat.

The Maya used jade -- much like another culture we will study -- and most notably obsidian for a task that was considered by many to be the first form of divination. Many magical historians like Professor Anne Barkum believe such things, and think that the Maya were the first diviners.

We can see that the Maya had a rich, strong culture which allowed them to survive for so long. Of course, not much of this would have been possible without their integration with magical folk as well. They had their own writing system, language, and an entire sociology. However, that's enough information for today, I think.

I will see you in the next lesson.

History of Magic 101 is a basic introduction to the history of the wizarding world. Topics covered include the various theories on the origins of magic, the Olmec and Clovis people, ancient Egyptian priests, and more. Students will work to understand larger topics in history and connect major events to people, places, and their own lives.
Enroll
Hogwarts is Here © 2022
HogwartsIsHere.com was made for fans, by fans, and is not endorsed or supported directly or indirectly with Warner Bros. Entertainment, JK Rowling, Wizarding World Digital, or any of the official Harry Potter trademark/right holders.
Powered by minervaa