Hello again! This week, we will be finishing up our tour of the world. I hope you have all been taking excellent notes and starting your revisions, as next week includes your final examination! But for now, let’s dive into the topic and continent of Australia.

Aboriginal magical practices, or those that are native to Australia, are among the oldest currently practiced in the modern world, as these peoples have inhabited the continent for, at most, 70,000 years. Tribes were, and are, organized into groups of people that spoke the same language, of which there were many. Prior to the decline of aboriginal tribes upon the arrival of colonists, there were 250 distinct language groups, and therefore tribes (though, it is important to note that this is the conservative estimate, as many languages were similar and the colonists were not terribly interested in documenting small differences). All told, the population at this time is estimated to have been somewhere between 75,000 and 350,000. Inside a tribe, there were smaller divisions as well, such as families and clans, in addition to another interesting division, called moieties. Nearly all of those in aboriginal life, no matter their tribe, were divided into one of two moieties. These groups created a dichotomy not only of people, but most living things as well. For example, people of the Yolŋu (Yolngu) tribe were divided into either Dhuwa or Yirritja, along with animals, plants and totems. Therefore the people of each moiety were associated with various things found in nature. Moreover, in every tribe with moieties, men and women were only allowed to marry those from the opposite moiety. Interestingly, this dichotomy typically (though not always) divided those with magical abilities from those without, which made the intermarriage of magical and non-magical Australians very prominent. This led to unprecedented levels of magical abilities through the general Aborigine population.

Partly because of their widespread magical abilities and gradual adaptation to the environment, Aborigines were able to live far inland in the harsh Australian outback and spread all over the continent. Over time, their magic became more and more tailored to the land in which they lived, creating a beneficial snowball effect. Truth be told, the entire aboriginal population was deeply in touch with nature, feeling a great kinship with their lands and everything that lived there. From magianthropologists’ accounts, we know that aboriginal magical practices were very nature-focused and quite powerful in that realm, allowing individuals to breathe underwater, adapt to look like their surroundings while hunting, and even suppress the explosions of volcanoes.

Centuries passed without much contact from the outside world, apart from the occasional interaction with nearby trepangers -- hunters and traders from nearby Indonesian islands that wished to collect the trepangs, a kind of sea cucumber native to the shores of Australia -- with whom they interacted peacefully and in a mutually beneficial way. It wasn’t until the mid to late 1700s when Aboriginal Australians were exposed to other cultures in large amounts.

In the late 1700s, many witches and wizards came hidden amongst the first wave of European Muggle colonists, hoping to escape the “non-magical overpopulation” and the Industrial Revolution they were experiencing in Europe. Many magical families felt these two factors stifled their ability to live amongst Muggles in harmony, and actual physical space in which to create more magical societies where Muggles would not stumble upon them were running low. Thus, a new territory to settle and explore seemed a godsend. Gradually, witches and wizards filtered through the borders and set up small towns, generally going further inland than their non-magical counterparts. 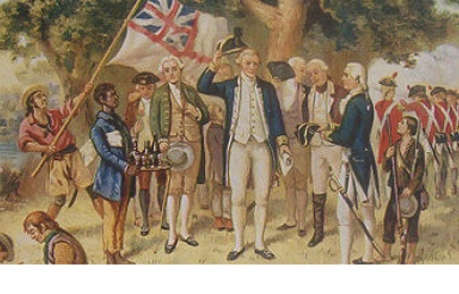 Unfortunately, this spelled the beginning of the end for many of the tribes on the continent. Due to a phenomenon known as ethnocentrism, many of the explorers who had investigated the Australian continent had assumed that there were no other ethnicities, apart from themselves, and concluded the continent would be uninhabited, a “no-man’s land”. However, the various explorers, primarily Dutch and British, were surprised to find the area already populated. However, this discovery did not change the minds of the colonists and explorers -- as ethnocentrism often results in prejudice and the dehumanization of the “other,” in this case, the native Aborigines -- and the land was promptly claimed for various European countries. An example of this attitude can be found in the first-person account of the Muggle officer, Watkin Tench as he describes his first visit to the continent.

“We found the natives tolerably numerous as we advanced up the river, and even at the harbour’s mouth we had reason to conclude the country more populous than Mr. Cook thought it...This appearance whetted curiosity to its utmost, but...the governor immediately proceeded to land on that side in order to take possession of this new territory and bring about an intercourse between its new and old masters.”

As you can see, after its discovery, Australia was no longer viewed as territory belonging to the Aborigines. While Australia became the shelter of European witches and wizards, the native-born magical persons suffered from diseases, displacement, and the exhaustion of natural resources due to the European’s unfamiliarity with living off the land as the Aborigines did. Sadly, this story is not an unfamiliar one at this period of time. Many regions were colonized without the consent or understanding of indigenous peoples due to ethnocentrism and a lack of understanding or respect for the indigenous people’s traditions. The phenomenon of ethnocentrism is a topic we will be discussing more in your Fourth Year when we discuss Asia, as it has had similar negative effects all over the world.

Fortunately, the aboriginal way of life has not been completely eradicated, and the overall population has shown an increase over the last few years, with the highest Aborigine presence centering around the Northern Territory. Thus, Australia remains a quilt of various traditional and contemporary magical practices.

Nestled in the wide expanse of the Northern Regions, Danunda Magical Academy was created in a location that was initially deemed “uninhabitable” by the officials who first surveyed the area. However, the intrepid group of founders objected, stating it was the perfect place, and the area was made much more hospitable over a long period of time during the late 1800s. Various incantations for irrigation, weather adaptation, and animal-repelling, along with the expected Muggle protective enchantments were layered over the area.

Prior to its creation, wizarding children in Australia, particularly the sons and daughters of British or other European immigrants, simply shipped their children back to the European continent to attend one of the schools there. However, in the late 1800s the Australian population finally reached a point there were more native-born Australians. Due to overcrowding and the immense impracticality of shipping students back and forth on a yearly basis, the Outlying Offices of Magical Australia (OOMA) -- a magical government that had slowly cropped up in this new colony -- decided it was high time to build their own institution.

Additionally, it is interesting to note that in more recent years, exchange programs with aboriginal populations have become more and more popular. Of course, Danunda is still the option for the majority of Australian students, but it is not the only one. Indeed, some students, particularly those already of aboriginal background, often eschew traditional magical academies altogether.

That about does it for today’s lesson!  If you have any questions, either about lesson content or assignments, feel free to owl me. I would highly suggest that you all begin studying for your final exam next week if you haven't already. Best of luck!

History of Magic 101 is a basic introduction to the history of the wizarding world. Topics covered include the various theories on the origins of magic, the Olmec and Clovis people, ancient Egyptian priests, and more. Students will work to understand larger topics in history and connect major events to people, places, and their own lives.
Enroll
Hogwarts is Here © 2022
HogwartsIsHere.com was made for fans, by fans, and is not endorsed or supported directly or indirectly with Warner Bros. Entertainment, JK Rowling, Wizarding World Digital, or any of the official Harry Potter trademark/right holders.
Powered by minervaa