Come in, come in! I know you all want to hide away and go study for your O.W.L. exam, but we still have much to cover! I’ll keep today’s introduction short due so as to not keep you over like I did last week. Please make note that this is Lesson Eight and that you only have one more lesson before your O.W.L. exams, which will cover Years One through Five. Study well and you’ll do just fine. Now, let’s dive into our topic for the day, African wizarding schools!

If anyone has studied different magical schools around the world, it should come as no surprise to you that we will be focusing the majority of our time today on the oldest and largest of all wizarding schools within the world. Uagadou is located in western Uganda, specifically within the Rwenzori Mountain Range. Surrounded by mist and snow throughout the years, the Rwenzori Mountains are also known by another name, the Mountains of the Moon since the moon’s light is reflected by the large amounts of snow.

The mist surrounding these mountains have led to the continued mystery of the “school in the sky” as Uagadou is often described.  To my disappointment, and I’m sure yours as well, the reality is not quite so exciting. While I cannot divulge the exact location of the school, I can tell you that it is located upon an isolated mountain whose top is nearly always covered by the clouds and mist.

Founded in 980 CE, Uagadou is the oldest of all 11 elite wizarding schools throughout the world, although it is not the only school found on the African continent. 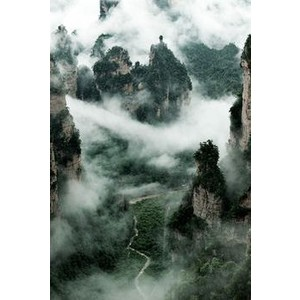 Now, the school itself blends in directly with the mountains, which is possibly one of the reasons it has remained a secret for so long. Of course, like any magical school, Uagadou does have precautionary spells put in place for individuals who dare venture up into the highest peaks of the Rwenzori Mountain Range. The entrance to the school is protected by very powerful ancient runic magic whose origin is still contested to this day. Uagadou is one of the only schools to have never experienced an attack, making it perhaps one of the safest schools on the African continent. If you look at the picture I’ve provided below, you may notice an opening of sorts near the middle of the image. You are looking at the entrance to Uagadou.

Uagadou was founded by Kiama Atieno, a lone wizard who was born in 920 A.D. We do not know much about Mr. Atieno’s history other than the fact that he was abandoned at a very young age by his family.  However, fortunately for us, Atieno kept a very detailed record of his journey starting from the age of 23 years. Through his journal we learn that Atieno was what most people considered an alien to the wizarding community as he secluded himself in his studies, refusing to interact with his fellow witches and wizards. Although he did so with good reason, as he discusses in his journal:

“After being cast out by those whom you thought you could love, one comes to realize that perhaps it is best that they live alone. The frivolities of life distract wizard kind from making advances that could change spellwork and our lives forever, but do they? No, rather they decide to be jovial and celebrate that which ought to be mourned. For surviving a day without despair only means there is potential for worse harm in the future. Rather than celebrating that which they do not know, perhaps time should be better spent in furthering our knowledge for future generations.”

Atieno did just that and hauled books with him wherever he went in an attempt to understand our world through magic. A number of subjects drew his interest and thus these became the subjects that Uagadou is known for today, namely astronomy, alchemy, and transfiguration. Throughout his travels across the continent in search for a more in-depth understanding of the magical world than ever before, Atieno met two other minds similar to his own. Amani Njowga, an expert in the world of astronomy, also sought to understand one of the greatest philosophical questions of life -- why does man exist? Another associate and later friend of Atieno and Amani was Fikira Madini, a female student studying the processes used in alchemy at the time. The three met by chance at a conference discussing breakthroughs within the magical community in Ouagadougou. The three became extremely close friends, but it wasn’t until Atieno reached the age of 60 that he approached them with the proposition of opening a school where the focus would be to push the limits of magic.

Admission to Uagadou is perhaps the one aspect of this school that you will find familiar as it follows a very similar process to that of Hogwarts. Though they do not use letters to indicate acceptance into the school, the Headmaster will send out individuals known as Dream Messengers who visit the children while they sleep. The Dream Messengers leave a small stone token engraved with a message in addition to the student’s name and the first day of classes. The stone is often found by the child upon waking up.

There is no geographical restriction for student acceptance to Uagadou. The students come from across the continent of Africa, though the majority of their student population is from west and central Africa.  The typical age of a first year student of Uagadou is ten years old and they will continue through the program and graduate at the age of 19. Yes, you heard me correctly, the curriculum of Uagadou is nine years in duration. However, it is important to understand that the last two years include internships and other training outside of normal schooling.

As you may have guessed from the founders’ areas of expertise, Uagadou focuses its efforts on alchemy, astronomy, and transfiguration as Atieno believed that these were the areas that could push the limits of the magical world the most. These three classes are required during all nine years of a student’s study at the institution, though the final two years focus more on pushing the known boundaries of magical limitations through experiments. Apart from these classes, students are required to take two years of introductory material on a number of magical disciplines. In their third year of study, students begin a specialization, focusing in a particular area. Due to the overarching goal of Uagadou to push the limits of magic, it is usually uncommon to find specializations in magical sports or other forms of entertainment. Students are allowed to take more than one specialization (and many do), but a student is unable to specialize in more than five fields. The most common specializations are those relating to alchemy, potions, transfiguration, and ancient history, though no student is limited by the most popular choices. 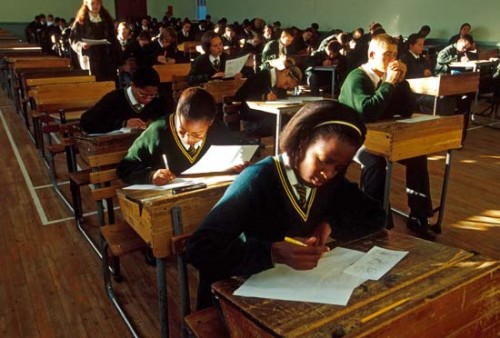 While you all have your OWL and NEWT examinations at Hogwarts, Uagadou has their Kiawaida, Ultalaamu, and Ustadi examinations. The Kiawaida examination covers the first two years of their education in which a student must sit for a three hour written and three hour practical examination testing them on all the information they learned during their general coursework. The Ultalaamu examination is given at the end of the seventh year once students have completed their specializations. These two hour examinations are extremely difficult and have a passing rate of 48%. Students who do not pass their Ultalaamu examination may retake half of the classes necessary for the specialization and be retested, choose a different specialization, or leave the school with a certificate of their knowledge in the other general subjects. You cannot complete an internship through the school if you do not pass the Ultalaamu examination. Finally there is the Ustadi examination. This examination is a reflection of your success in your internships and is given by the mentor or mentors selected by the school. They are nearly all practical based examinations that require passing in order to graduate from the school.

Before I let you go, I have a small and interesting tidbit to share. You may have heard that it is uncommon for witches and wizards in Africa to use a wand and you would be correct. Anyone who attends Uagadou as a student is taught that a wand detracts from pushing magical limits. Due to the relentless pursuit of breaking the boundaries of magic, students at Uagadou are required to learn and use wandless magic. If necessary, a student may use a wand during their first year, but after the second year, wands and all other foci are considered unnecessary.

I have taken up enough of your time today! Go on and enjoy the rest of your day. Ah, before you go I do want to mention your assignment. I am hoping that it comes of no surprise to you that the OWL examination for this course will be coming up in the week following our last lesson in Year Five. For those of you who don’t think you have to study, unfortunately, I am going to make you. For your assignment this week, I would like you to go back through all five years of History of Magic and pick one topic from each year that you believe has the potential to be an essay question. Create your own essay questions for each year (you should have a total of five) and answer each in no less than 300 words. If you have questions, you know how to reach me. I shall see you next week.