Lesson 4) Into the Dungeon

Into the Dungeon
Today we will be covering a creature that many fully trained witches and wizards find difficult to fight. They are rarely seen in inhabited areas and usually remain in their regional locations, though there are the rare occasions that they choose to roam in search of food, which is usually meat. At Hogwarts, there have been two known instances of this type of creature entering the castle, both of which were during the 1991 to 1992 school year. One we do not necessarily credit as being in the castle since it was never technically loose. It remained locked in a room and was being used as a defense to protect the Philosopher’s Stone. However, the previous spotting was on Halloween night, when three unsuspecting First Years came face-to-face with one and were able to escape the situation with “sheer, dumb luck.” Today’s lesson will be about trolls, and no, I’m not talking about the failing grade so many of you fear getting.

A fully grown troll is typically around twelve feet tall and can weigh as much as a ton. Their skin is lumpy and they only have two toes on either foot. They are massive creatures, but where they excel in size, they lack in intelligence. Trolls are incredibly stupid creatures (hence the lowest possible grade in our grading scale being named after them). No one is quite sure exactly how intelligent a troll can get. There have been a few successful attempts to train trolls to act as security guards, which means that some have the potential to be minimally intelligent.

Don’t let their lack of intelligence fool you, though. They are extremely aggressive creatures and will attack first and never think about it. Fully grown trolls can be angered in a matter of seconds and are easily agitated by loud noises. When a troll is angry, the best place to be is as far away as possible. If you find yourself facing an angered troll, the best option is to keep moving, since trolls are not fast creatures.

Types of Trolls
Now that we have looked at the qualities of trolls in general, we can briefly look at the different types of trolls. There are three types, though many Magizoologists argue for the inclusion of a fourth category. The three primary types are the river troll, the forest troll, and the mountain troll. Each type has a varying level of size and aggressiveness, though all are equally dangerous. 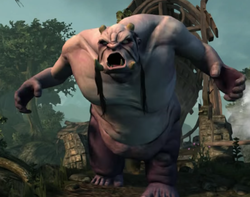 The first type of troll to discuss is the river troll. These trolls are typically shorter than the average troll and weigh a little less. Their skin is purple, they are covered in purple hair, and they have short horns on the top of their head. River trolls can often be found lurking beneath bridges or in the middle of rivers where travelers frequently cross. Travelers will often not know that a river troll is lurking nearby until the troll reveals itself, at which time it is too late for the traveler and they will be forced to fight.

The second type of troll is the forest troll. Their skin is a pale green and they, similar to the river troll, are quite hairy, though the hair can either be green or brown. They are native to forests and areas with many trees, as their name suggests. There have even been a few sightings of forest trolls living within the Forbidden Forest on our own grounds, though I encourage you not to go looking for them. It is called the Forbidden Forest for a reason and students caught venturing into the forest will be brought before the Headmistress. Fortunately, these types of trolls rarely leave their native regions unless they are extremely hungry and have not found any people roaming in the forest to eat.

Finally, we move on to the biggest and baddest of the trolls. The mountain troll is the troll that sets the standard for troll classification and description. This was an important, and much debated decision. In the end, the Ministry determined that it was better to base the average information of a troll on the nastiest of the troll species so that witches and wizards would be prepared for an attack from any species of troll. These trolls stand at around twelve feet when fully grown and can weigh more than a ton. They have no hair on their bodies, which is made up for by the lumps that help distinguish them as mountain trolls. They also carry around massive clubs which they use to help them knock out their victims before they eat them. They also have particularly small heads in comparison to the rest of their body. If one looks closely at the body of a mountain troll, they also will see many scars. These scars are created by the troll’s attempt to use a Graphorn as a mount, of which the Graphorn (a large, hump-backed creature with grey-purple skin that is as tough as the scales of a dragon) will most often not approve. This is the type of troll that was unleashed on the castle by Professor Quirinus Quirrell on the Halloween night of 1991. The troll was luckily knocked out by Harry Potter and Ron Weasley. Professor McGonagall praised them, saying that “not many First Years could take on a fully grown mountain troll and live to tell the tale.” This is true, but not for the reasons one might expect. 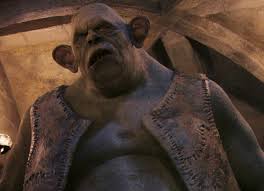 Fighting a Troll
It is true that a First Year student, or even a group of First Year students, would struggle in a battle against a fully grown mountain troll, or any troll in general. They may fare a little better against a younger troll, but there is no guarantee for that. This is due to the magical tolerance of trolls. Trolls, being a purely magical creature (though they display little to no magical capabilities of their own), have built up a tolerance to magic that runs within their blood. Their pure lineage makes them tolerant to magic, but they are still affected by spells. The problem that arises is that the spells are weaker against trolls than against other targets. The Stunning Spell will not work at all, though nobody understands why. In order for a spell to have more of an impact on a troll, the caster must put forth a large amount of willpower, something that no First Year student would be able to do. This is why Professor McGonagall says what she does - she is aware that the amount of willpower needed would far exceed the capabilities of most First Years.

Non-magical methods of fighting a troll have been proven to work and there are certain spells that have been known to work well, too. The spell I will teach you today builds on the idea that Ron Weasley used to defeat the troll. If you all remember properly, when the troll was unleashed on the castle during the Halloween feast of 1991, Harry and Ron went searching for Hermione and found themselves facing a fully grown mountain troll. None of the three should have escaped, since it is rare that First Years have the magical capabilities to harm a troll for reasons that have already been discussed. However, with a little ingenuity and a whole lot of luck, Ron remembered the spell he had just learned from his Charms class, the Levitation Charm. With a swish and flick of his wand, as well as the incantation, he levitated the troll’s club out of its hand until it was high enough that, when he released the spell, the club fell and smacked the troll on the head, knocking it unconscious.

The Bludgeoning Hex
We will not be reminiscing on the Levitation Charm as a method of defense against a troll, but instead will be considering the moment that the troll was knocked out. When the club, a heavy object that fell a distance of a few feet, made impact with the troll’s head, the troll was immediately knocked out; this is where we will focus our energy when fighting a troll. Today’s spell is the Bludgeoning Hex, a hex that, when cast properly, will cause a forceful impact with the targeted area of the victim.

The Bludgeoning Hex is a relatively simple spell, but you would not be Fourth Year students if the situation was not a little more complex than it appears. In today’s situation, we are dealing with a creature that has a magical tolerance. I have already mentioned this and explained what it means, but it never hurts to be reminded. This magical tolerance means that you will have to exert more willpower in order to make them feel the spell and hopefully knock it out. This is true for all cases where the Bludgeoning Hex is cast - you must consider the necessary amount of willpower to exert in order to effectively attack the target without causing permanent damage.

Now, I know in the previous lesson we discussed the concept of the life force. With trolls, we do not need to heavily consider their life force, since there will rarely be a time that you are in a situation when you will be extinguishing that life force. However, it is still important to consider since we are considering all life to be sacred. Many scholars have debated the existence of the soul within a troll, since they are humanoid creatures, but have extremely limited intelligence. This raises the question of whether our life force simply keeps us alive or builds more of who we are and is a question I want you to think about as we keep learning about new creatures. You never know when I will expect you to analyze the life force of a creature for an essay.

Spell: The Bludgeoning Hex
Wand Movement: A clockwise circular motion around the area to be impacted finished with a flick of the wand towards the target.
Incantation: Labefactum (LAH-beh-FACK-toom)
Concentration: Moderate, on the intended target of the spell
Willpower: Moderate to high, depending on the target

Well, that appears to be all the time we have for today. As always, there will be a short quiz on today’s material and an essay. I would also begin reviewing the material from the previous weeks, since you will have a midterm next week. On the midterm, you will be expected to not only recall the information provided, but also think critically about the concepts we have covered and how they can be used. With that in mind, be sure you are extremely familiar with the material and can not only use it in the given scenarios, but can shift it into other forms.

*All photos come from the HP Wiki unless otherwise noted.