Lesson 8) Something in the Water

Well, Fourth Years, you have arrived at your final full lesson of this year. Next lesson we will conduct a review of the basic information from each lesson this year and you will be sitting your final examination for this course. I hope you have all been revising your notes and are fully prepared. You will need all of the skills that you have been learning this year in order to do well. Before we can review, we must first cover the last bit of content. As you have noticed in the name of the lesson, our final subject of the year involves water. Actually, it involves what lives in the water. Many different people have different names for it. The poet Robert Burns likened them to the Christian religion’s Satan. Others have referred to them as water demons. Even the Muggles have a name for this creature - The Loch Ness Monster. The Scots, the ones who gave them their official name, call them kelpies.

Kelpies - Your Not So Friendly Energy Water Demons
The kelpie is a shape-shifting creature that lives in water and is rated XXXX by the Ministry of Magic. Its place of origin is Scotland, where it first inhabited the lochs and pools. Over time, kelpies began migrating and found a home in England, where it now lives in the streams and rivers. Ever since, rumors have popped up all throughout the world, both in magical and Muggle culture, of sightings of the kelpie. Muggles often recognize this creature as the Loch Ness Monster. Oh yes, the Loch Ness Monster is real, but not in the way that Muggles understand it. The first sighting of a kelpie by a Muggle occurred when the creature was in a sea serpent form. It poked its head out of the water and a Muggle happened to be near. The Muggle was far enough away from the water that the kelpie didn’t notice them, but close enough that he could snap a photograph, which turned out blurry. Thus, the rumors of the Loch Ness Monster were born. Ever since, Muggles have sought the monster, yet few have ever seen it again.

The reason it has never been concretely spotted again is because nobody knows the true form that it takes. Similar to a Boggart, the kelpie has no distinct form; it can take the form of anything that it chooses. Its most frequent form is the form of a horse. 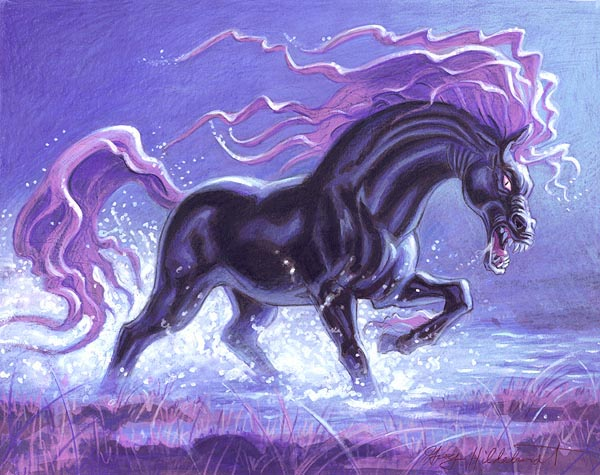 The primary reason that this creature is considered so dangerous is because it catches its victims by surprise and there is no method of defense that is guaranteed to work against one. It will lure its victims close to it, letting them even get on their back. Once the person is on their back, the kelpie takes them out to sea, drowning them. What happens next….I’ll let you research that. There is no known spell that allows a witch or wizard to escape an encounter with a kelpie. However, there is a method for controlling a kelpie for a short amount of time. If you happen to be carrying a bridle with you, you would be able to use a Placement Charm in order to place the bridle on the kelpie. This would make the kelpie docile for a short amount of time.

As with all forms of magic, the duration that the Placement Charm would be effective depends entirely on the willpower put into the spell and the individual willpower of the kelpie. It takes a great deal of willpower to overcome the will of such a naturally magical creature, so most wizards can only keep the bridle on it for about fifteen minutes. The longest I have heard a kelpie being controlled is an hour, but even this was at great cost to the wizard who cast the Placement Charm. He was taken to the nearest magical hospital and ordered to bed so that his magical energy could repair itself. He was not allowed to use any magic for a week or he would risk the deterioration of his magical ability completely. This would mean that he would no longer be capable of casting spells or performing any feats of magic.

Kelpies in the Muggle World
Earlier, I mentioned that Muggles are aware of the existence of the creature. In fact, one artist named Andy Scott has even made a giant sculpture depicting two kelpies in their horse form, which can be seen below. 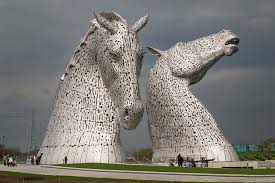 The real question that arises here is why the Ministry of Magic has not stepped in. Part of the job of the Department for the Regulation and Control of Magical Creatures is to ensure that moments like this never occur and that, when they do, the appropriate memories are modified. The same question can also be asked where fairies, pixies, sphinxes, chimaeras, and manticores are concerned. Each of these creatures appear in lore that is told to children and is studied in Muggle schools, yet each of them could potentially reveal the existence of our world. Rest assured that the Department for the Regulation and Control of Magical Creatures works tirelessly to ensure that the stories remain just that to Muggles - amusing stories that are used to teach children morals.

Before you start getting any ideas about attempting other spells on these creatures in an attempt to subdue them, I will tell you that it will not work. Kelpies are pure magical energy. In this manner, they are similar to Boggarts except they do not have an actual weakness. They cannot be beaten the way a Boggart can, they can only be stalled and temporarily controlled. The best advice is to avoid an encounter with a kelpie at all cost.

Life Force is...Energy?
Now, I could not, in good conscience, let you all leave for the day without having a discussion about life force one last time. From salamanders to Erklings, there has always been an identifiable life force that can be used to overcome them. Kelpies are this year’s exception. They do not have a solid life force because their life force is magic. They exist only by the fact that magic exists to allow them to change shape. If you could find a way to cut off all magical energy, you would then be able to say you overcame the life force of the kelpie. However, by cutting off all magical energy, you would also cut off your own ability to perform magic. You would also take away magic from everyone. Everyone would instantaneously be made into Muggles.

Do not mistake me. Muggles have made advancements in science and have learned to survive in a world without magic. They are to be commended for all they have accomplished. However, we have been given a gift with magic and taking that away just to negate the problem of a single creature leaves the world vulnerable to the even more dangerous magical creatures that don’t need magic to exist. Of course, this is all theoretical because it is impossible to perform any magic that would cut off all connections to the magical energy. It would take more energy than any single person, or even all magical people combined, could accomplish.

That brings our final full lesson of Year Four to an end. You will have one last quiz and an essay to complete. Once you complete those, you are free to continue studying for your final examination. Be prepared for anything. Many of you have been caught off guard all year by questions I have posed because they were no longer straightforward. This will continue in the final exam and into future years. So go, prepare, and be the best student you can be.

*Note: All images used were found through Google Images