As the students enter the classroom, they hear a loud cackling from a box that sits on Professor Penrose’s desk. There are also discernible words between the sounds and many students seem drawn towards the box.

That will do! Professor Penrose casts a Silencing Charm on the box. The cackling immediately stops and the students move to their seats* As you can see, the subject of today’s class can be quite dangerous. You must take extreme caution when handling today’s lesson. First, a few comments.

Congratulations! You have successfully made it to the halfway mark of your Fourth Year. You have so far studied six new spells and two creatures. This has been an impressive amount of information and I have been pleased with the results on your quizzes and essays. However, do not get complacent. The term is still progressing and next year you will be sitting your O.W.L. examinations. With this in mind, I certainly hope you all have been taking adequate notes and revising your information from previous years.

Though we must always be prepared for the future, we cannot let it distract us from the here and now. You all know the consequences of being ill-prepared for a situation. Today we will be discussing another creature and this one is probably one of the most dangerous you will have experienced yet. It is dangerous because it targets children. This means that anyone who is still affected by the Trace can feel the alluring pull of this creature’s call, though younger children are more affected since they do not have the willpower to resist. The name of this dangerous creature is the Erkling. 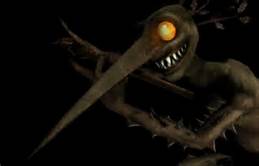 The Erkling is a creature that is native to the Black Forest in Germany. It has been rated XXXX by the Ministry of Magic, though the number of attacks has diminished greatly due to the restrictions that have been put in place by the German Ministry of Magic. They are generally related to elves, but do not get quite as tall as the British house elf. The Erkling will only grow to be a maximum of three feet tall. Another distinguishing feature is its pointed face. This pointed face is accompanied by a long, pointy nose which the Erkling can use to shoot darts at its unsuspecting victims. Even though it has the ability to shoot darts out of its nose, this is not its main weapon. Its main weapon is the cackling that you heard as you walked into the room. This high pitched cackling is extremely appealing to children and those who fall in the late teenage category who are still children at heart. As you get older, it gets easier to resist the allure of the Erkling.

Once a child has heard the cackle of this creature, it uses the continued call to lure the child away from its parents or away from safety. Once the child is on its own, the Erkling attacks and eats the child. It can also use its ability to speak human language to assist in the luring of children, though it is not often used. Many scholars have studied these creatures in an attempt to discover why the cackle is so appealing to children but has no effect on adults. So far no conclusive evidence has been provided, but it is theorized that adults have less malleable minds and are less receptive to the childish sounds. They tend to ignore it and refuse to take responsibility for something that is not within their own understanding and has no impact on their own lives. Children, on the other hand, are naturally more curious and tend to wander more, exploring the universe around them. They are more likely to get involved in incidents that do not directly concern their life. This is why many theorize that the children can be lured so easily by an Erkling - they want to discover what could make a sound like that and are responding to their own curiosity where an adult would brush it off as “not their concern.”

The Erkling that we have discussed so far - the Erkling that originates in the Black Forest of Germany - tends to focus on the indirect method of attacking their victims. They cackle at a distance and lure the victim away or they shoot the victim with darts. However, there is another type of Erkling that is much more malicious. The Bavarian Erkling, which is native to Bavaria, is similar to the Germanic Erkling in almost every way. It is an elfish creature that measures no more than three feet tall and has a long, pointed nose. It still cackles to lure children, but it is more malicious because it won’t wait until the victim is drawn away to attack. Bavarian Erklings are well known for their attacks in public places, eating their victims out in the open. This makes them easier to handle, since they can be seen, but they also are more difficult to deal with because they will not hesitate to attack anyone who becomes a threat.

These creatures are also unique in our discussion of life force. In our previous lessons, we have dealt with creatures that have had very clear life forces that could be used to eliminate the creature. When fighting a salamander, you want to extinguish the fire or snow from which they came. With trolls, the argument is being made that they have souls that allow them to exist. Erklings do not have souls. There is only one thing that keeps an Erkling alive and that is children. They can survive on other types of meat, such as the meat of a goat or cow, but prefer the taste of children. They must feed at least three times a day or they will wither away. One important thing to note is that the meat must be fresh. If the meat has been sitting for a day or more, it will act as a poison to the Erkling and will quickly kill it. Unfortunately, we may not have such meat available to us. This means that we also should have a few spells that we can use to help us.

Defense Against an Erkling
Now, I’m sure many of you have already considered spells from previous years, as well as a few spells we have learned this year, that could be useful to help deal with an Erkling. For example, one could cast the Full-Body Bind Curse on the creature, which would leave it paralyzed until such time that it withered away and died. While useful, spells that we have learned so far are only minimally effective because, at your level, you would not be able to cast them with enough strength to cause them to last long enough to truly harm the Erkling.

Many of you will be frustrated that I will only explain the theory of the spells that will be most effective to protect yourself against an Erkling. As much as I would love to allow you to start practicing these spells, there are reasons that you won’t be able to use them to their full effect. Both require skills that you will not be honing until your Fifth Year, but you can start learning the theory required, as this content will still be on your exams, including the O.W.L..

One spell that is useful and long lasting is the Silencing Charm. When cast properly, this spell makes the target mute and can be effective for several hours, certainly long enough that the Erkling would not be able to lure a child. You will learn this spell next year in your Charms class. I simply want to make you aware of it now so you know it can be used once you do learn it.

The next spell that I will be explaining to you is a slightly simpler spell that will be just as effective. You will even be able to begin practicing it, though you will see no real effect. This spell is called the Orbis Jinx which, when cast properly, will create an orb of earth around the target. The catch is that the target must remain in the same spot while the Orbis Jinx is cast. This can be accomplished in many ways, but I urge you not to attempt to mix spells.

The Orbis Jinx can still be practiced. When cast on a target, nothing will happen to the target, but your wand will still light up with a blue light. This spell requires a moderate amount of held concentration because the spell must be continuous until the target is fully engulfed in the orb. As long as the blue light at the tip of your wand is lit, the spell is working. If you lose concentration, or lessen your willpower, the blue light will go out and you will have to cast the spell again and start from the beginning.

In order to cast the spell completely and successfully, you will have to be able to hold the spell for approximately thirty seconds. Until such time that you can practice the actual use of the spell, practice this spell on targets that will do nothing but cause your wand to light up with the blue glow. This way you are prepared and able to cast the spell successfully when we revisit this spell and these creatures next year.

Spell: The Orbis Jinx
Incantation: Orbis (OR-bis)
Wand Movement: Point wand at target and draw a continuous clockwise circle aimed at the target. The wand movement must be maintained until the spell has finished.
Concentration: Moderate, on the development of the orb
Willpower: Moderate

And that brings us to the end of the lesson. I will not delay you any longer, for I know you all are excited to complete your midterm assignments. There is no quiz on the specific content of this lesson, since the information is included in the midterm examination. There is also a midterm essay which I think many of you will find enjoyable. Keep practicing the material you have learned, study your notes, and always be prepared.

*Note: The image used was found through a search of Yahoo Images.