Branches of a Tree

Welcome
Professor Mitchell was writing on the chalkboard as she heard her students join her in the classroom. “Hello, everyone!” she said, not turning to face them as she continued writing. “Please come up and set your homework assignment on my desk for those who chose to participate in the extra credit. We’ll begin momentarily.” she soothed. She finished writing, stepping away from the blackboard and facing the class. On the board were five words… 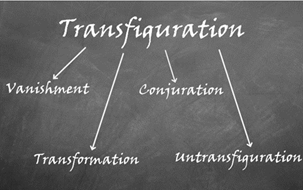 These are four branches of transfiguration. They were defined in 1651 by a German transfigurist, though we’re unsure of the name of this person. There were a few different wizards who claimed credit that year, including Fritz Holtz, whose notes disappeared in a mysterious fire the day before the big transfiguration conference. Others had similar claims to their original notes being either stolen or destroyed, meaning any possible evidence as to who was first no longer exists.  No matter who it might have been, these branches are still extremely relevant to transfiguration today. The different branches of transfiguration are transformation, vanishment, conjuration, and untransfiguration. They each have their own spells that fall within them and each will be taught during different years. Your first four years with me will focus on transformation. Fifth Year will discuss vanishment, while conjuration and untransfiguration will be N.E.W.T. level subjects, with conjuration being taught in Sixth Year and untransfiguration in Seventh. I hope you will chose to stay with me for your N.E.W.T.s, though I know it’s inevitable that I will lose some of you along the way.

Transformation
Transformation is the branch of transfiguration we will be talking about first. It is the most common form and is usually what people initially think of when hearing the word “transfiguration.” This is a form that causes things to actually change from their original state into another, or alters the form of them. While this is the first branch that we teach, transformation also contains some of the darkest transfiguration knowledge. No, we will not be going over that in this class so please do not ask. 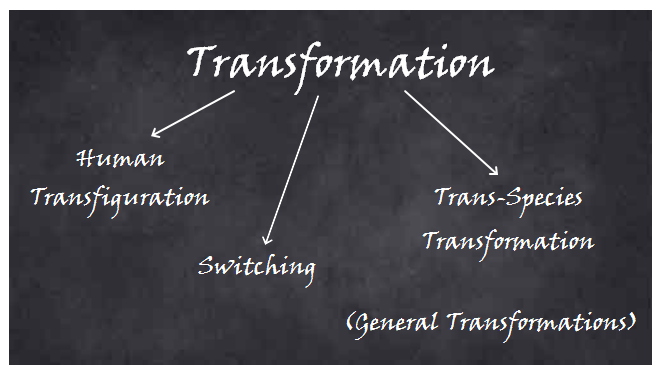 Switching spells are spells that either switch the physical location of two items or one essential detail of an object. This will be discussed in detail in Year Four. A trans-species transformation is a transformation that to some degree changes the species of the target. Human transfiguration is exactly what it sounds like: the act of transfiguring the human body. This is an extremely complex form of transformation, and thus will not be discussed until your Seventh Year if you chose to take N.E.W.T. level Transfiguration. There are several different types of human transfiguration, such as cross-species switches directed at human targets. An example of this is the spell that was used by a contestant in a past Triwizard Tournament that allowed Viktor Krum to transfigure his head into that of a shark so he could breathe underwater. There are more specific types of human transfiguration as well, such as the animagus, metamorphmagus, and werewolf transformations.

Animagi are human beings with the capability of fully turning themselves into an animal at will while keeping their human sentience. This is a completely voluntary and learned skill, one that is extremely difficult to master. We will not be teaching this skill in this class and it is highly encouraged that you do not try to learn this on your own during your time here at Hogwarts.  It is extremely difficult and time intensive to learn, which is why many choose not to. Part of this process requires that a witch or wizard keep the leaf of a Mandrake plant under their tongue for a full month, which many people find extremely inconvenient. Each person is only able to turn into one form of animal for their shape and this animal will bear some identifying mark related to their human features.  For instance, someone who wears glasses may have a darker outline of fur around their eyes. Any intense, permanent body altering will also be noted in the animagus form. For instance, let us remember the case of Peter Pettigrew, whose missing finger was there in both human and animagus form. It is important to note that Animagi are required to register with the Ministry of Magic.

Metamorphmagi are human beings with the capability of changing parts of their appearance at will. While considered a part of human transfiguration, this is not a skill that can be learned. Rather, it is a trait that 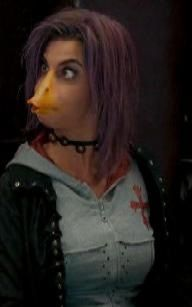 certain witches and wizards are born with that is believed to be genetic. One example of a metamorphmagus was member of the Order of the Phoenix, Nymphadora Tonks, who frequently altered her facial features for the purposes of disguise and amusement, among others.  Metamorphmagi can change almost anything in their appearance, from sex and age to something as simple as hair or eye color. They do not require a wand or potion to do so.

Werewolves are different from the above two forms of human transfiguration as they do not have a choice in their transformations. They are forced to change at every full moon. Normally when this happens, the person does not keep their human mind. Due to this, werewolves are incredibly dangerous and will attack any human on sight. That being said, there is a potion that allows someone to keep their human mind during the full moon, though the transformation will still take place. This is called the Wolfsbane Potion, which was created by Damocles. You will learn more about this potion in your Sixth Year with Professor Baine. I won’t go into detail about how one becomes a werewolf, as this will be covered in your Care of Magical Creatures and Defense Against the Dark Arts classes.

Vanishment
Vanishment is a branch of transfiguration that allows the transfigurist to cause an object to disappear from the world. There are many theories on what actually happens to items that have vanished. Some believe that they disappear all together and can never be returned. The most popular opinion is that the objects are disassembled and the particles scattered throughout the world. They are broken down into such a small amount that they appear to “no longer exist.” However, they cannot truly cease to exist due to the law which states that matter can neither be created nor destroyed. The more complex the object, the harder it is to vanish. This is a rather difficult category of spells that will not be discussed in detail until your Fifth Year. There is technically only one spell required to make something vanish, but there is much to discuss relating to the topic.

Conjuration
Conjuration spells are significantly more complicated than their vanishment counterparts.  Conjured items are formed by pulling together the particles around us to create the object we desire, essentially opposite to the way in which items are vanished.  Accomplishing this requires the transfigurist to take into account all of the details of the object they are trying to conjure, a difficult task, which is why this is something that you will not learn unless you choose to continue on with Transfiguration into your N.E.W.T.s. There are also extensive laws restricting what can and cannot be conjured and things that are conjured also will not last forever.  We will go over some of these restrictions in the next lesson, but as a general rule, whatever you wish to conjure must first exist in the world.

Untransfiguration
Untransfiguration is precisely what it sounds like. It is a series of spells that allow you to undo previous transfigurations. However, this is mostly for transformations, as vanishment cannot be undone, and things that are conjured disappear naturally after a matter of time. This will be the topic of your Seventh Year, along with human transfiguration and some other advanced transfigurative topics.

Conclusion
Thank you for your attention and time today! I hope you enjoyed the lesson. There will be a mandatory quiz to be completed before next lesson. Have a wonderful week!

An introduction to the science of transfiguration. This will cover what transfiguration is, its branches and laws, and basic inanimate transformations. Enroll