Welcome
As the new Fourth Years entered the classroom, Professor Mitchell had just finished placing a blank piece of paper on each desk.  She waited patiently at the front of the room, twiddling her thumbs, as the students found their seats. As the excited chatter died down, the professor waved her wand and a cool breeze blew through the class. Looking around, it took a moment before the students realized that the sheets on their desks now held the year’s syllabus. Grinning at the looks of surprise on her pupils’ faces, the professor began the lecture. 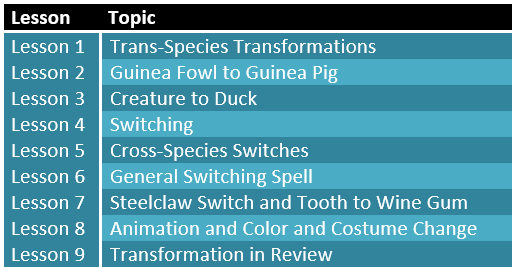 Welcome back, class, to another wonderful year of Transfiguration!  As you can see from your syllabus, this year will be jam-packed as we will be going over animate to animate, or trans-species, transformations in addition to beginning our look at switching spells.  I’m very excited, as I’m sure all of you are, to be moving out of our general transformations at the end of the year.  So, without any further ado, let’s begin!

Animate to Animate v. Trans-Species
Animate to animate transformations are our last stop on our journey through the word of general transformations.  That said, some of you may be thinking back to your First Year and remembering one of the three sub-branches of transformation known as trans-species transformation and wondering: what’s the difference?

At this point, it would probably be helpful to define what exactly a species is.  In general, a species is the lowest taxonomic rank.  We talked a lot about animal classes last year, which are the fifth lowest taxonomic rank. Each step on the ranking system somehow narrows down the classification of the organisms described.  The largest is life in general, which encompasses all living organisms, followed by the domain. There are three domains, with animals and plants falling under the Eukarya domain.  From there there is the kingdom, phylum, class, order, family, genus, and species.  Organisms within the same species have the ability to produce a fertile offspring.  Species also typically share similar DNA patterns and may also be divided further into subspecies.  The step up from species, genus, includes all species that share a common ancestor.  Though this classification process isn’t perfect, it works for many biological applications and for our purposes in transfiguration.

On the topic of sub-branch crossover, there is also the question of how human transfiguration relates to trans-species transformations.  Though human transfiguration, specifically transforming a human into an animal, technically falls under the definition of trans-species transformation, it gets its own branch due to the vast complexities of the human species.  While the complexity of our bodies is not necessarily greater than that of other mammals, it is the immeasurable depth of our minds that makes people so much harder to transfigure.  While we won’t actually learn any specific human transformations until N.E.W.T. level, I still want you all to take some time to think about it because many of the theories we will be discussing this year also apply there.

Theory
So, I’m sure you all can figure out this part by now, but with animate to animate transformations we have both an incredibly complex result in addition to a natural will to overcome, meaning both your willpower and concentration must be strong in order to successfully complete the transformation.  This makes them significantly harder than any transformations that include an inanimate object..  Rather than just hiding a consciousness, or 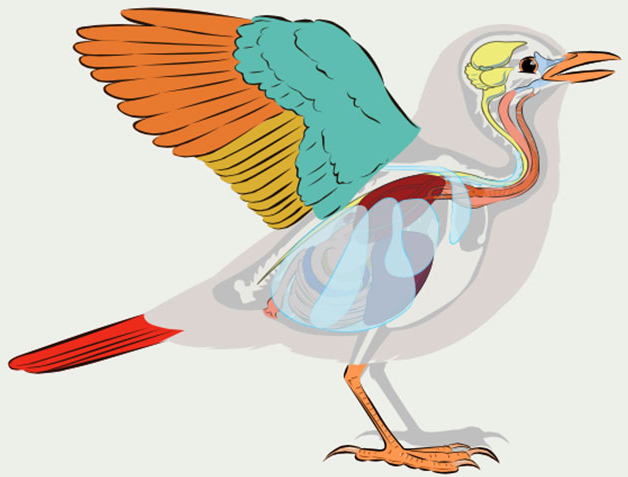 creating one from scratch, you are convincing an existing mind to alter and turn into that of another creature.  Physically, you need to note the internal differences of the two creatures you are working with as, rather than taking away or adding organs, you are merely modifying the ones already there. This is especially important as the resulting creature is still alive! It still needs to be able to breathe, eat, and complete all the other normal bodily functions required for survival.  While with inanimate to animate transformations close was good enough when it came to what went on inside the body, animate to animate requires a greater level of detail.  That said, it is slightly easier to change what is already there when compared to creating an entire organ system from nothing.

Finally, despite the fact that our starting creature has a natural life force that will want it to be in its natural state, animate to animate transformations will not naturally revert.  The reason our animate to inanimate transformations were able to force themselves back into their natural states was because the life force was being trapped and muffled and therefore had something to break out of.  With animate to animate transformations, however, the life force is still free.  A transformed creature will still have all the life force it started with and that life force will be active and uncontained.  Because of this, though it wants to be in its natural state, it doesn’t “want” it enough to force the untransfiguration.  It is content enough being free that it does not hold the strength necessary to overcome the magic.  To try to understand this concept, imagine for a moment that you were trapped in a plain, white room with nothing to do and only a locked door between you and the outside world.  After a little while of being in the room, you would probably get anxious, eventually hitting the point where you would do nearly anything to break out of that room.  Now imagine a similar situation, but instead of being trapped in a small room, you were simply confined to a city. You have free reign of the city and can do whatever you wish, you just can’t leave the city limits.  In this case, sure, you may want to get out of the city, but you would probably be happy enough that you wouldn’t reach the point of desperation you would in the white room.  You wouldn’t give up anything and everything to get out.

Time for the weird questions…

When it comes to animate to animate transformations, there are a lot of strange questions and theories that may come to mind. My goal for today is to attempt to touch on some of these questions that you may have, though I know I will not be able to address every concern.  It is important to note that transfiguration is still a large area of research in the wizarding world, particularly in the branches that deal with living things.  We are not even remotely close to knowing everything there is to know about this branch of magic, as deeper and deeper questions are being asked every day. It is important in any field of study to be constantly asking questions, as this is the best way to discover everything we can.  Curiosity leads to innovation and discovery. We cannot find any answers without first having a question.

One of the big curiosities surrounding trans-species transformations involves the question of reproduction. We know that a transformed creature is still alive and contains all of its original life force, so logic would dictate (if all internal changes are made correctly) that it is possible for this creature to produce offspring. This is, in fact, the case. There are numerous theories as to why this is so and many researchers are currently attempting to figure out how it all works.  The big thing to note with this is that, because the baby inside the mother is its own entity, untransfiguring the mother would not untransfigure the baby. The same theory applies when initially attempting to transform a pregnant mother. In order to be performed successfully, both the baby and mother must be transfigured simultaneously, something that is near impossible to do. Even the slightest difference in timing would cause the baby to be lost as the mother’s body would not be made to carry the child of another species. At least, that is what the theory says. This has never actually been tested due to the ethics involved.

Similarly, many wonder what happens if some part of a transfigured thing gets cut off or somehow separated from the main body.  This separated part now has its own individual essence, as it is no longer a part of the original, and must therefore be transfigured or untransfigured independently from the rest of the thing.  So, say you transform your cat into a dog and proceed to shave said dog.  Upon untransfiguring, your cat will still be shaved and the hair littering the floor will still be that of a dog.

When thinking about trans-species transformation and human transfiguration, you may also be wondering whether you can transfigure an animal into a human.  Theoretically, this is completely possible, however it has never been successfully done.  Humans are simply too complex to create.  All previous attempts have either failed completely or resulted in a humanoid creature with the intelligence of a one-year-old child.

Conclusion
That is all I have for you! Before I let you go, however, I must note, though the theories I have presented today are indeed fascinating, none of you should be experimenting with any of this on your own.  Not only is it immensely dangerous, but it is also against the law.  The transfigurists researching these theories have dedicated their lives to learning about them and doing so safely.  They have also been tested and approved by the Ministry to conduct their experiments.  If this is something you are greatly interested in, have some patience and the time will come when you will be able to dive into it more completely.  Next week we will be the Guinea Fowl to Guinea Pig Transformation, so I will see you all then!