Welcome
As the Fourth Years entered the Transfiguration classroom, they got the overwhelming feeling of déjà vu. The front of the room once again looked like a small pet shop, as it had a couple weeks back when they learned the Ducklifors transformation.  There were owls and cats and guinea pigs and even a frog or two.  With all the animals, it was a bit noisy, meaning the students didn’t even realize their professor was missing until they had all taken their seats.

All of a sudden, the classroom door burst open and Professor Mitchell entered, looking rather flustered and muttering something about a bird and some glitter.  When she got to the front of the room and turned to face her class, however, she appeared cheery as normal.

Introduction
I do apologize for my tardiness, Mr. Smith seemed to have gotten into some of my, ahem, craft supplies this morning, so I had a little bit of a cleanup job to do.  But, jumping right in to make up for lost time, I hope you are all ready for a fun class today and for your midterm after the lecture!  As always, this midterm will cover everything we have learned so far this year, up to and including today’s material.  So if you’ve all got your thinking caps on, let’s begin our discussion of cross-species switches.

Cross-Species Switches
This subset of switching is actually one of my favorite parts of transformation, simply because it has relatively few practical applications and you can get rather creative with it if you really want to.  So, what are cross-species switches? The best way that I can describe them are as a combination of switches and trans-species transformations.  They take one part of one animal and turn it into that of another.

Let’s talk about how to cast these switches.  We’re going to start with what you know about casting trans-species transformations and alter that just a bit.  As we discussed last week, the big difference to account for is the change in target.  Rather than focusing on the entire target creature, you must be sure to keep your mind centered on only the part that you wish to change.  For cross-species switches, these are all physical parts, such as the nose, tail, or ears.  Also note what this means in terms of animacy and consciousness.  Your target is no longer a full living, thinking creature. 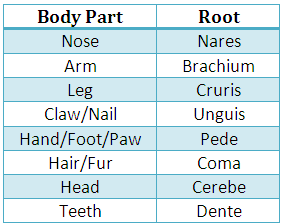 Rather it is a mere physical part that does not hold any of the animacy of the full creature. Sure it may have blood moving through it and the cells might still be living, but if isolated from the rest of the body it is, in its essence, inanimate. It cannot move without direction from the brain and it cannot think for itself, meaning there is no consciousness to overcome.  The other alteration you need to make is to the incantation. The incantation, you ask? Yes, the incantations for cross-species switches are actually the same as those for trans-species transformations, but with an extra word applied to indicate the target body part! The chart to the right gives you the roots for a few common targets.

Now that we’ve got that down, onto your task for today! The goal will be to give your chosen target the bill, or beak, of a duck.  The incantation, following the explanation above, will therefore be a combination of the incantation for the Creature to Duck Transformation, “Ducklifors,” and the root for nose, “Nares.”  As always, the rest of the spell casting components are up on the board and you have your pick of targets from those at the front of the classroom. 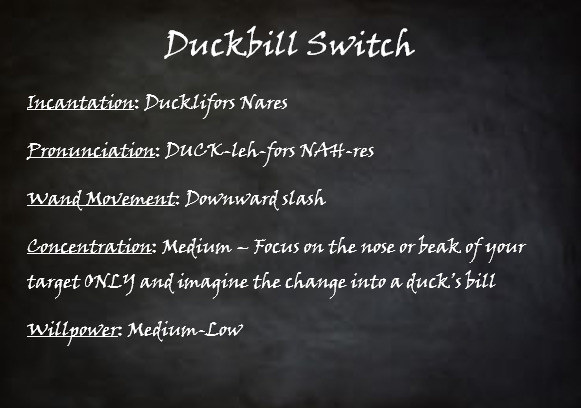 Complications with this spell, along with other cross-species switches, follow similar patterns to those seen in any other kind of switch.  If you fail to keep your focus only on the part of the target that you wish to change, your magic may try to alter the entire creature.  You can imagine this can be especially problematic when dealing with a live target.  If you can’t quite see the full implications, take a look at the level of concentration and willpower required to perform this spell and compare it to that of Ducklifors back in Lesson Three.  When casting this transformation, you use a lot less of these components because the size of your target is smaller and does not contain a consciousness.  Though this makes it slightly easier to cast than a full trans-species transformation, you will likely not be applying enough willpower to overcome the consciousness of a creature should your concentration waver and your magic attempt to transform the whole thing.  You all should know the consequences of that at this point.  I have full confidence that each of you will be successful in isolating your target area, but if not, please call me over to untransfigure promptly.

Where did this come from? Why do I care?
It’s difficult to say that this spell was invented by anyone in particular as it is just one of many combinations of cross-species switches.  So, instead, I’ll give you a little background on this class of switches in general. The concept of a cross-species switch was developed in 1911 by researchers Kisha and Evan Jones.  They were private researchers working to “build” the perfect defense animal.  They discovered that they could combine the strong body of a bear with the sharp talons of an eagle and poisonous bite of a viper by altering certain trans-species transformations.  It was certainly a breakthrough in the transfiguration community as the possibilities appeared to be endless.  It allowed spell inventors to test their incantations and wand movements for new animate to animate transformations without having to deal with the issues of consciousness and size.  This means that we now have some theoretical trans-species transformations that have not yet been successfully performed, but whose incantation and wand movement should work if the appropriate amount of concentration and willpower to transform the entire animal could be achieved.

Many cross-species switches are used for one of two purposes: defence or entertainment.  There are plenty of people in the magical community who keep magically engineered animals on their property in order to keep intruders at bay.  Some of these creatures are transfigured using cross-species switches in order to make them appear fiercer or otherwise more threatening.  On the other side of things, these spells are also used in many shows and various forms of entertainment to present audiences with a “wow” factor.  Trying to come up with the weirdest combination of creatures has become somewhat of a pastime for some, though many argue that this use of the spells goes against typical moral and ethical codes as some of the more out there combinations have a tendency to get uncomfortable for the creature involved.

Conclusion
And that wraps up cross-species switches, so I’m afraid it’s time for your midterm. Those of you cramming in the back of the room, please put your notes away and take out your quills.  There will be both an essay and test portion for the midterm.  Take your time and bring it up to my desk when you are done.  Good luck!