Welcome
The Transfiguration classroom was bright with sunlight as the students filed into their sixth lesson of the year. Professor Mitchell was sitting behind her desk, hurriedly trying to finish grading the midterms from the previous week while munching on a bright red apple.  Two bowls of assorted fruit sat in front of her, obviously the targets for today’s transformation.  As the door shut behind the last student, the professor flourished her red quill, smiled to herself, tossed her apple core out the window, and stood to begin the lecture.

Introduction
Well, I’m glad to see all of you back in class after last week’s midterm.  I have them all graded up at the front of the room for you to pick up at the end of class. The grades were decent, but I’d like to see a little more effort as we finish out the year.  After all, next year you will be sitting your O.W.L. exams and I expect only the top grades from those wishing to pursue Transfiguration at the N.E.W.T. level. 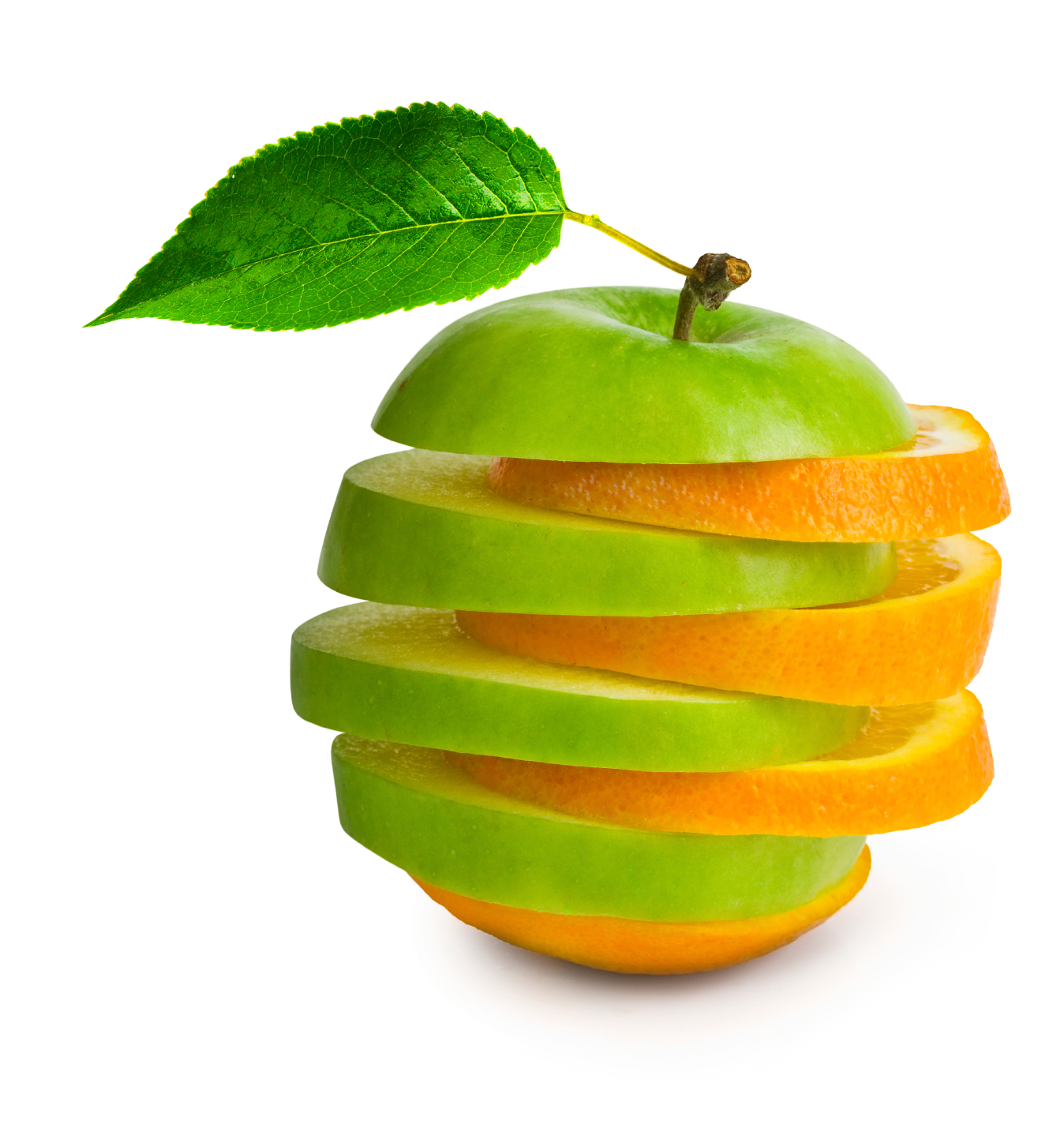 The General Switching Spell
The General Switching Spell is a switching spell focusing on the locational feature of an object.  More specifically, it takes two objects and swaps their locations in space.  This includes both their physical forms and their essences, meaning that the objects you have after the spell is performed are fully and completely themselves. Attempting to perform an untransfiguration spell (with the exception of Reparifarge) on either item will have no effect, as untransfiguration spells work by latching onto an item’s inherent essence. How does this happen, you ask? We’ll discuss that a little more in a bit, but I first want you all to get a feel for the spell yourselves.  The details are all up on the board, as always, and you may work with a partner to practice switching any two pieces of fruit from the assortment I have up here on my desk.  If you want to take one of your targets as a snack after class, feel free but do be sure to wash it before eating. 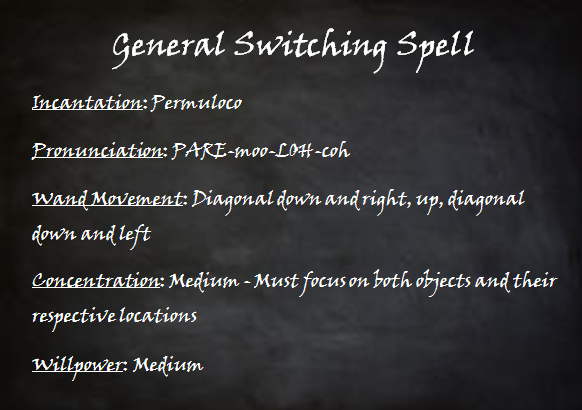 An important thing to note with this transformation is that you must know precisely where both objects are when you’re trying to switch them.  Though the spell can be cast on an object that you cannot see, such as one in another room, you must still have a general idea of where in that room the object is located.  If you are slightly less sure on the location, you must strengthen your focus on the target object to compensate or risk switching the wrong thing.  Other casualties of incorrect location concentration include accidentally vanishing one or both targets or the spell simply not working.  A lack of willpower may also cause a splinch of sorts in which you end up with a partially transformed item in both locations.  If this happens, Reparifarge must be cast on both objects simultaneously.  If it is only cast on one, but not the other, a small explosion may occur as the spell cannot separate the other mixed up object.  This means that it cannot complete target A as desired and has nowhere to send the pieces of target B that were all jumbled up.  When Reparifarge is cast simultaneously on both splinched items, they will revert to whichever essence is currently held within them, as an essence, unlike a physical form, cannot be separated or splinched. 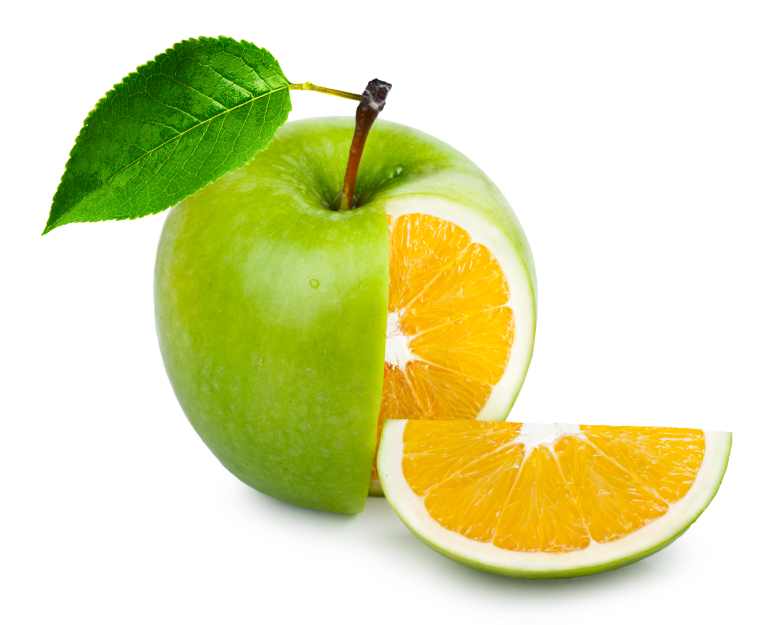 The Partial Switching Spell is essentially the same as the General Switching Spell, but targets just a part of the two existing items in question.  So, for example, I could switch the strap on Mr. Williams’s bag for the braid in Miss Tyler’s hair, or the peel on this apple for the peel on this orange.  The latter is what I would like you all to attempt now.  When trying to isolate the part you wish to swap, remember your practice last week with the cross-species switch as it is remarkably similar, though this spell targets two existing items. 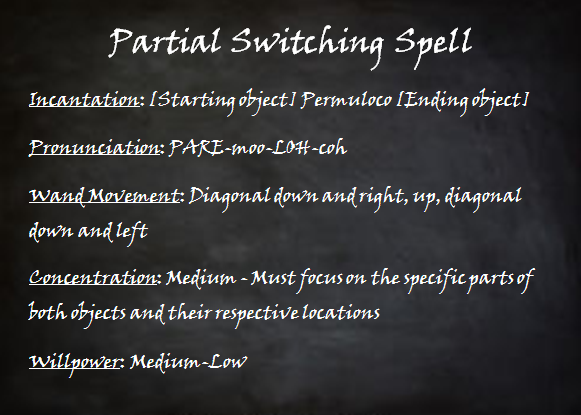 You’ll note that the wand movement and the base of the incantation are exactly the same as those for the General Switching Spell.  This is once again similar to the case of the cross-species switch.  As the spell does essentially the same thing, but on a smaller scale, the same incantation works for both.

You can also swap part of one item with the entirety of another using this spell.  You must alter your concentration a bit to make this happen, but I’m sure you are all more than capable.  This little trick is actually incredibly helpful, and I find myself using it far more than the standard part for part, particularly when I find myself seated on a rather uncomfortable chair. It is simple enough to swap out the seat for a fluffier cushion.

Curiosities
The inventions of the General Switching Spell and Partial Switching Spell have unfortunately both been lost to the ages.  So, instead of listing out the many theories for how these spells came about, I am going to give you some insight into the future of these transformations.

I’ve mentioned transfigurative research many times before in this class as it is a rather active field.  The two spells covered today are of particular interest to some researchers, myself included.  I mentioned earlier that the essences of the two targeted objects travel with their physical forms and that we know this due to the inability to untransfigure them.  The question that researchers are asking is then “so what actually defines this essence? Is it actually the exact same object?”  The answer to this is trickier to understand than it may seem.  Is an object and its individual essence described solely by its appearance, weight, and texture? Or is it defined by the exact particles that make it up?  You see, we still do not know quite how the objects get from location A to location B when the General Switching Spell is cast.  Some believe that the particles and molecules that make up the object scatter at location A and “fly” through the air to reassemble at location B, as this is the only way that it may maintain its exact makeup and essence.  However, skeptics say that this would be too difficult, even with magic, as the likelihood of a particle being scattered off course by the other particles in the air on its way is very high  Therefore, it is nearly impossible that every particle could make it to location B in the few seconds required by the spell. Others argue that the switch occurs like any other transformation, simply using the particles closest to the target and altering them into what is necessary to create the desired object.  But then what differentiates it enough that untransfiguration doesn’t work?  As you see, it is a rather difficult conundrum we have here that I’m afraid we won’t actually be able to solve until we have some way to track individual particles and atoms throughout a transformation. 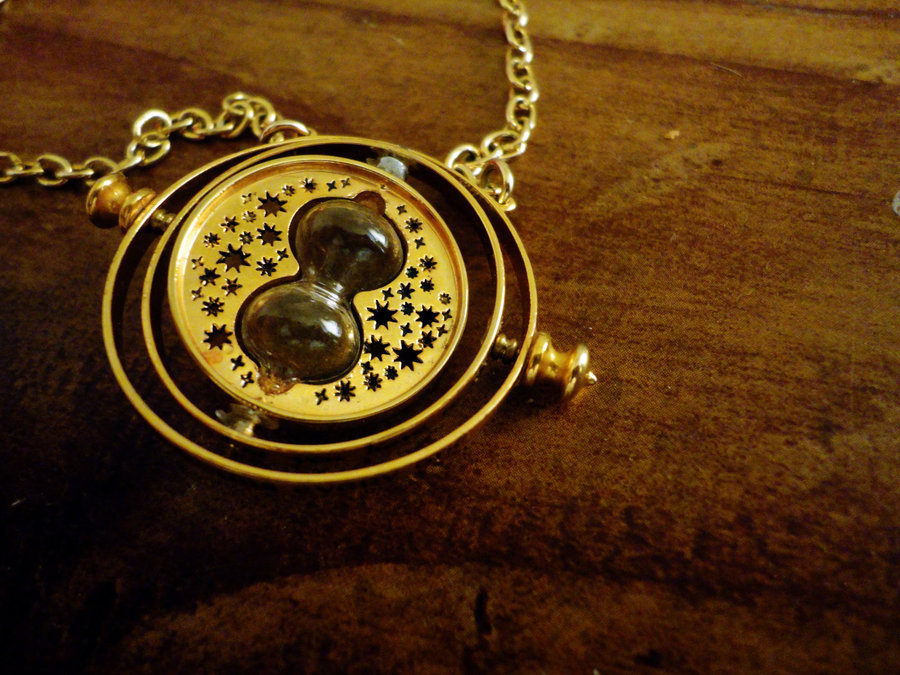 Another curious aspect of the General Switching Spell, in particular, is the concept of time.  We say that this spell deals with location, specifically within space.  But what about location in time? We know that time can be played with through objects such as the Time-Turner, but is very finicky when trying to touch it through spellcasting.  There is the Hour-Reversal Charm, which is used to make the Time-Turner, however it is remarkably unstable when used without containment.  In order to function in a relatively safe and controlled manner, the spell must be woven into the material of the object (a process you will learn more about in your Charms class).  If you were to cast it out into open space, however, without the grounding presented by the physical Time-Turner, the effects could be catastrophic.  Despite this, and the many other dangers that come with messing with time, research is still being done to see if the General Switching Spell could be expanded or if a similar spell could be created that might allow us to swap items through time.  Of course, a spell like this would have a multitude of dangers and difficulties to go along with it, but I’ll let you contemplate those for your essay assignment this week.

Conclusion
And on that note, I’m afraid we are out of time!  Be sure to pick up your graded midterm and your assignments for this week on your way out.  Ta ta for now!