Welcome
As the Fourth Years took their seats in the Transfiguration classroom, the first thing they noticed were little pouches of what appeared to be candy on each of their desks.  Before they could contemplate the sweets too much, Professor Mitchell snagged their attention. “Given one of our transformations planned for today, I thought a little treat was in order.  Feel free to munch throughout the lecture, we won’t be using those as targets, though I will ask you all to be sure none of this winds up in the hands of Peeves.  During this lesson last year, a couple of students slipped him some gummies and nougat and if you thought he was bad without sugar in his system...poor Mr. Filch spent a week cleaning flobberworm mucus out of the girl’s bathroom...but I digress.  Let’s continue our discussion of switches!”

Introduction
Today we will be discussing some switches that deal with physical features.  They are similar to the Partial Switching Spell, as they target a smaller physical part of a larger thing, but are different in that they don’t require two targets to perform.  Both of the spells I will be teaching you today, the Steelclaw Switch and Tooth to Wine Gum, can also used in defense!  In fact, many switching spells find their use in defensive situations.

Use of Switching in Defense
Given the more difficult nature of transfiguration, it is not always the go-to when you find yourself in a sticky situation.  That said, there are many times it may be utilized in an offensive or defensive manner.  For switching in particular, there are many spells that might help you, say, make a foe less intimidating.  This may happen by switching their teeth for wine gums or their venom for pumpkin juice.  For a human opponent, one might switch the attacker’s robes for a very cumbersome dress, allowing for a distraction and a means to run away with less chance of pursuit.  Offensively, you might give your furry companion an extra step up, such as steel claws or spines rather than fur.  There are additional spells, such as the Statue Animation Spell, which I briefly mentioned last year and will be officially teaching next week, that can also be used when further backup is necessary, but you don’t want any more human casualties.  There are a multitude of other possibilities, but I will have you explore those all in more detail for today’s assignment. 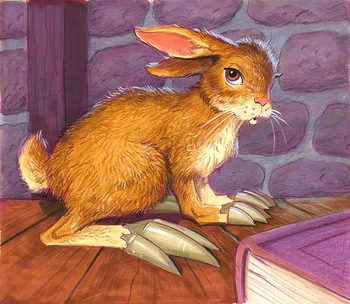 The first transformation we are going to look at today is the Steelclaw Switch.  This spell, as indicated by its name, swaps an animal’s claws out for sharp steel talons.  This is a switch that involves physical parts, so it shouldn’t be too incredibly difficult for all of you.  You just need to remember that you are exchanging an organic material, claw or nail, for an inorganic material, steel.  Extra concentration can give you a sharper point to your talons, but do be careful you don’t allow them to curve or get too long to the point that the creature may accidentally scratch themselves.  I have rabbits and cats in the back of the classroom for you all to practice on.  When you think you’ve got it, call me over so I can check your work and untransfigure the claws to ensure nobody gets hurt.  As this is a slightly easier switch, I will also present you all with a challenge.  The challenge is this: I want you to attempt to transfigure the entire paw’s worth of claws.  This is a little more difficult as you haven’t transfigured more than one “thing” at a time yet.  The trick to getting this right is two-fold.  When identifying your starting and ending targets, you must think of them as a cohesive unit of claws and talons, so that your spell will encompass them all at once. However, when concentrating on the change you wish to create, you need to be sure that you're directing each individual claw to make its own transformation, to avoid making one giant talon. You must trick your brain into seeing both the forest and the trees at the same time. 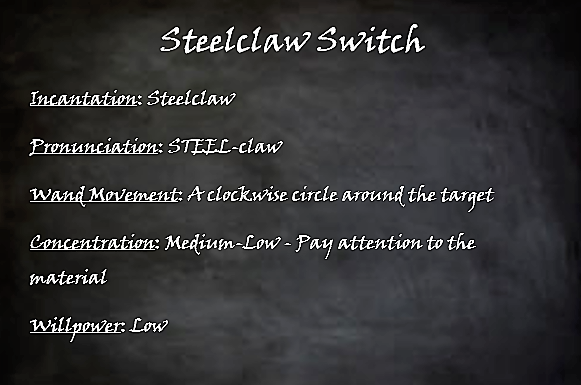 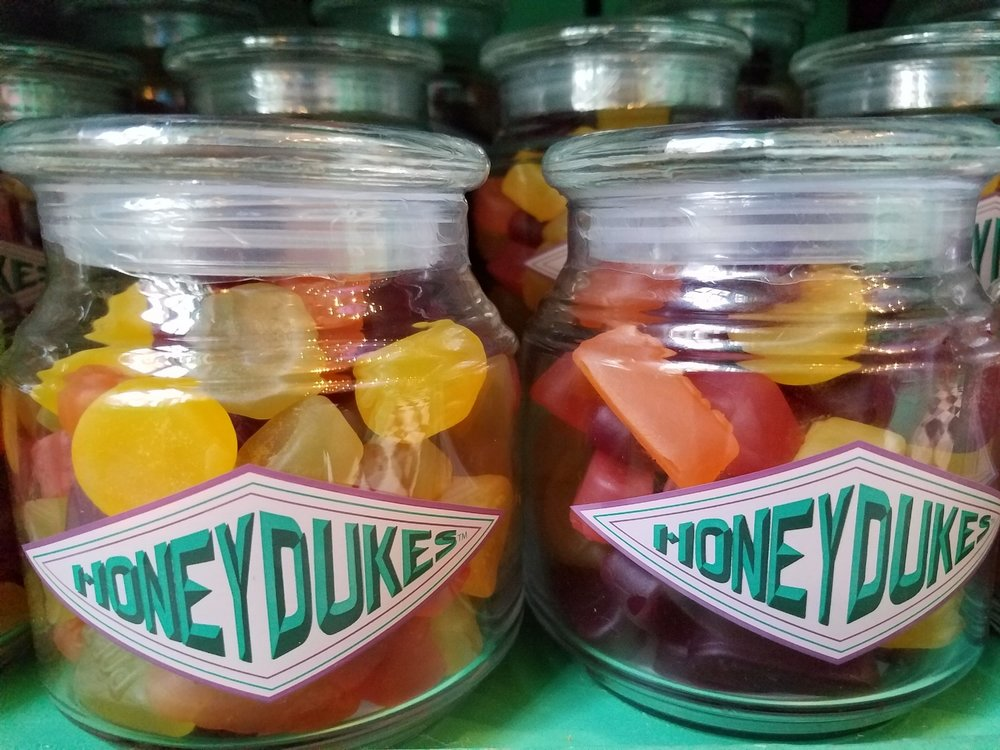 This next transformation is called the Tooth to Wine Gum Switch.  As you might have guessed, it swaps out the teeth of a creature for some much less threatening wine gums. In case you haven’t had the opportunity to try this tasty treat in your life, I’ve included some in all of your little goodie bags.  They are chewy fruit flavored gummies and a favorite of my mother.

This spell is made a little trickier by the fact that you cannot necessarily see your target when you cast, as the animal’s teeth are usually hidden by lips or fur.  This must be taken into account in both your concentration and willpower.  Your concentration must increase as you have lost your visual guide, so it is only the images in your head of your starting object guiding you.  Your willpower must also increase depending on the thickness and strength of the creature’s skin, as your magic must “break through” it in order to make it to your target.  Due to these added difficulties, I am only requiring you to change one tooth today, though of course you are welcome to aim for a few more if you wish.  If you find you are having trouble casting on your animal, I have a few sets of dentures up at the front for you to practice on as well. You want your finished product to be rounded like a wine gum, rather than pointed like a tooth.  This provides the best chance that you’ll keep your arm should a determined creature continue their attack regardless.  The spell details are on the board. 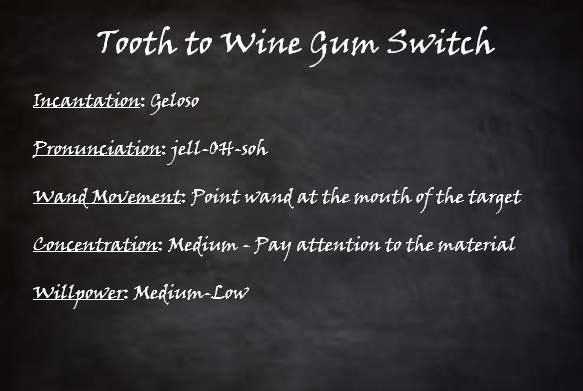 Both of these spells have only minor backfires. The biggest thing to be aware of is that applying too much willpower or letting your concentration waver may lead to more of your target transforming than desired. At this point in your magical schooling, however, you all should be able to control these components enough that you shouldn’t have a problem.  Do be careful about stressing the proper syllable in the Teeth to Wine Gums Switch as well, or you may find yourself with a very angry animal on your hands.

Where did this come from? Why do I care?
Both of these switches were invented by Felix Finnigan, who was a big cat enthusiast, owning two tigers and three lions, which he kept in his backyard.  Unfortunately for Mr. Finnigan, his cats did not enjoy their small and lonely habitat and made a habit of gnawing on his arm if he got too close.  To combat this, and ensure that he kept all of his limbs, he created the Tooth to Wine Gum Switch in 1947.  Felix was also rather paranoid, thinking the local Muggle authorities would attempt to hurt his pets if they ever discovered their existence, leading to the invention of the Steelclaw Switch in 1949.  Any time he left the property, he would cast the spell on his cats so that they could better protect themselves if the Muggles came snooping (because evidently being a 400 pound cat with regular claws would not have sufficed).

Conclusion
I hope you all enjoyed today’s lesson! Next week we will be discussing three different spells, but before you all go taking your Puking Pastilles in order to get out of class, I will note that one is a review from your Charms lessons. I will see you then!

Enroll
Hogwarts is Here © 2021
HogwartsIsHere.com was made for fans, by fans, and is not endorsed or supported directly or indirectly with Warner Bros. Entertainment, JK Rowling, Wizarding World Digital, or any of the official Harry Potter trademark/right holders.
Powered by albusb