Welcome
The front of the classroom looked like a small pet shop with rats, cats, lizards, and owls all scuttling about in various cages as the Fourth Years entered.  Professor Mitchell was already standing in front of her desk, waiting for her students to take their seats.  As the last Gryffindor sat down, she began the lecture.

Introduction
Are any of you having flashbacks to Second Year, coming to Transfiguration and finding a zoo?  Well, this won’t be the last time you’ll be faced with creatures in this class, but it is our last animate to animate transformation.  I know I am only giving you two practicals for this type of transformation, but at this point, I’m sure you all understand the theory of general transformations well enough to apply it to any you might encounter.  Don’t think, however, that just because we are finishing with these transformations today that you can just go and forget everything you have learned over the last three and a half years; you will be sitting your O.W.L. examinations next year, don’t forget, and everything is fair game.  So, without any further ado, let’s proceed.

What happens to the mind?
Last week we discussed some of the specifics concerning the life force of the creature in an animate to animate transformation, so this week I’d like to spend a little more time on what happens to the mind when it is transformed.  The big thing to note is that the mind of the creature transforms with its body.  That is to say, a monkey turned into a fly will no longer think as a monkey; it will have all the instincts and knowledge of the average fly, assuming the spell is cast correctly.  What kind of effect does this sudden change in head-space have on the creature? Well, upon transfiguring, it will most certainly be slightly disoriented, at least for a minute or two.  Imagine it like waking up at the end of a bizarre dream and not quite remembering where you are.  It is important during this brief spell of confusion to make sure that the creature feels safe, or its fight-or-flight response may kick in.  The same is true upon untransfiguring. Though it will be a little less severe, as the creature will be back in its own head, there will still be a moment of disorientation.

Another fascinating thing to consider is how the creature looks back upon its time in a different body.  It will only vaguely be able to remember what happened, almost like a dream that you just can’t quite recall all the details of. It will know that something strange happened, but all the details and specific happenings of the experience will be fuzzy and indistinguishable.  This is caused by the way the minds of different species work.  They are encoded in what can be thought of as another language, which can only be deciphered by one with the same mind.  It’s similar to the way in which we can only use legilimency against another human and not an animal.  When the creature is untransfigured, it can no longer retrieve the memories encoded in the language of whatever mind it was previously in.

Ethics
Now it’s time to pull all of this together and discuss the topic that I know you all have grown to love: ethics. Thinking about what we’ve discussed over the last two weeks, you always want to consider the possible physical effects of your transformations and the risks you’re taking when casting.  It is important to consider the reasons you are casting the spell in the first place to ensure that these risks are worth taking.  Once you’ve decided that they are, you must be confident in your ability to properly perform the transformation. Have you done enough research about your target? Do you know what to do should something go wrong? These are all things to keep in mind when you are casting a transformation targeted at a living thing.

Aside from the physical responsibility for the well-being of the creature, you are also responsible for its mental well-being.  Despite the fact that the target will have the mind of its current state, something will always feel slightly off when it’s not in its normal head-space.  You can compare it to the constant nagging in the back of your mind telling you you've forgotten something.  The feeling won’t be very strong, but over an extended period of time it can become quite distressing.  It is for this reason that you always want to make sure that you untransfigure your animate to animate transformations when you are done with them.  Until you learn how to do this yourselves, I will have open office hours for you all to practice your transformations where I can untransfigure them for you. 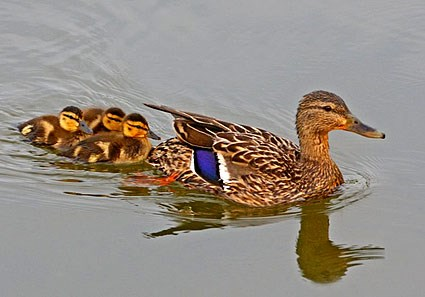 The Transformation
For today’s transformation, we will be attempting to turn a small creature into a duck with the Ducklifors spell. You have your pick of critters from the ones up here at the front and yes, Miss Flannery, I do know how many of each of them there are, so don’t get any ideas.  I expect them all returned by the end of class.  As you will all have different targets, it will be up to you to do your own observations and research about them to know what needs to be changed in your transformation.

Ducks are aquatic birds of the family Antidae and subfamily Antinae.  They are omnivores, whose diets include everything from grass, to insects, to fish.  There are species of nearly every color native to habitats around the globe, and many species migrate to warmer climates during the winter months. 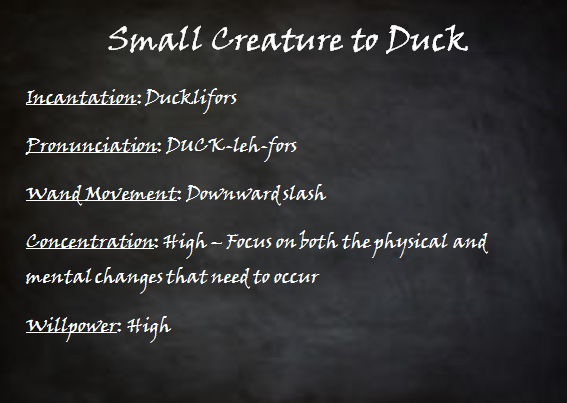 It is important to note with this transformation that you have to adjust your concentration and willpower to your chosen target more than you had to with similar spells in previous years.  This is due to the greater variability from creature to creature than from object to object.  The are more shifts that need to be made, and these shifts are more important.  For an animate to inanimate transformation, such as Fera Verto, the big changes that needed to occur, muffling the life force and removing the animacy, remained the same even when targeting a different creature.  In contrast, for animate to animate transformations, the big changes that need to occur are those concerning the inner workings of the body, which vary greatly from one creature to the next. The inherent magic of the spell isn’t quite strong enough to make all of the proper connections itself, so the mental components of your spellcasting must make up the difference.  It is similar to the reason that variations are much more difficult to perform on animate targets than inanimate targets.

Where did this come from? Why do I care?
Ducklifors was invented by Mr. Albert Cornfield, a duck enthusiast and Antarctic explorer and researcher. He was on an expedition in 1932 researching ice charms and missing his pet mallard, Kevin, when he invented this spell.  Throughout his expedition, he had befriended some of the local penguins and greatly enjoyed their company, but their hugs were just not the same as his dear Kevin’s. Through a little experimentation, he discovered that he could transform one of the smaller penguins into a duck that looked exactly like the one he was missing and took to doing so every night for a goodnight hug before untransfiguring his feathery friend and heading off to sleep.

Conclusion
That’s all I have for today! Next week we will be moving on into the wonderful world of switching, so I hope you’re ready!