Welcome
Professor Mitchell appeared to be moving boxes and crates as the Fourth Years entered the classroom.  There was what looked like a projector set up at the front of the room and a screen hanging in front of the chalk board.  As the students found their seats, the professor called over the chorus of end of year babble “My apologies for the mess, I told the people from the Magizoological Society to come by next week to pick up the critters I borrowed from them, but apparently there was a miscommunication and they’re coming tonight.” At that point, one of the boxes she was holding burst open and no less than seven rabbits bounded to the floor, scurrying to hide under the bookshelves lining the room. “Oh for the love of...I give up,” the professor sighed under her breath.  She dropped the now empty box and turned to face the class.

Introduction
I hope you’ve all been studying because today is your final! The year has just flown by, hasn’t it? But before we get to your tests, I want to give you a little review of transformations.  We have covered every subcategory of this branch of transfiguration, with the exception of human transfiguration, which we will be going over in a few years.  There has been a lot of overlapping, and occasionally confusing information, so I thought I’d break it down for you one last time.  Later in the lesson, I will also be giving you a little sneak peak at what’s to come in Transfiguration in your final years here at Hogwarts.

Switches differ from the prior two forms of transformation as they don’t affect the entirety of the target. Instead, they aim to change just one feature of it.  This feature can be a physical part of the object, its animacy, its location, or its style, among others.  Within switching also lie cross-species switches.  These are a specialized set of switches that target a physical feature on an animal and change it into that of another creature. Though not necessarily a category of its own, I also feel it important to note the uniqueness of the General Switching Spell and the Partial Switching Spell.  These spells are the only transformation spells that target two distinct items simultaneously, swapping their positions.

As I know some of you are more visual learners, I have also created a chart that will hopefully help you in differentiating the many forms of transformation.  Please take one with you in case you need another refresher in the future. 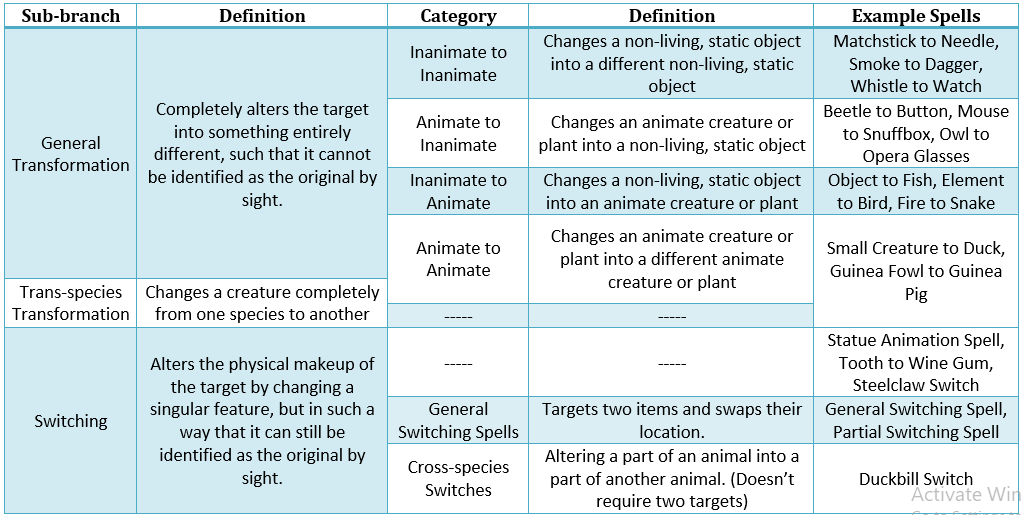 Now, in case some of you are still uncertain on why you need to know all about these “simple” forms of transfiguration, I have asked Professor Rosenquist to join us once again to tell you a little story from her time at Beauxbatons.  Sera? 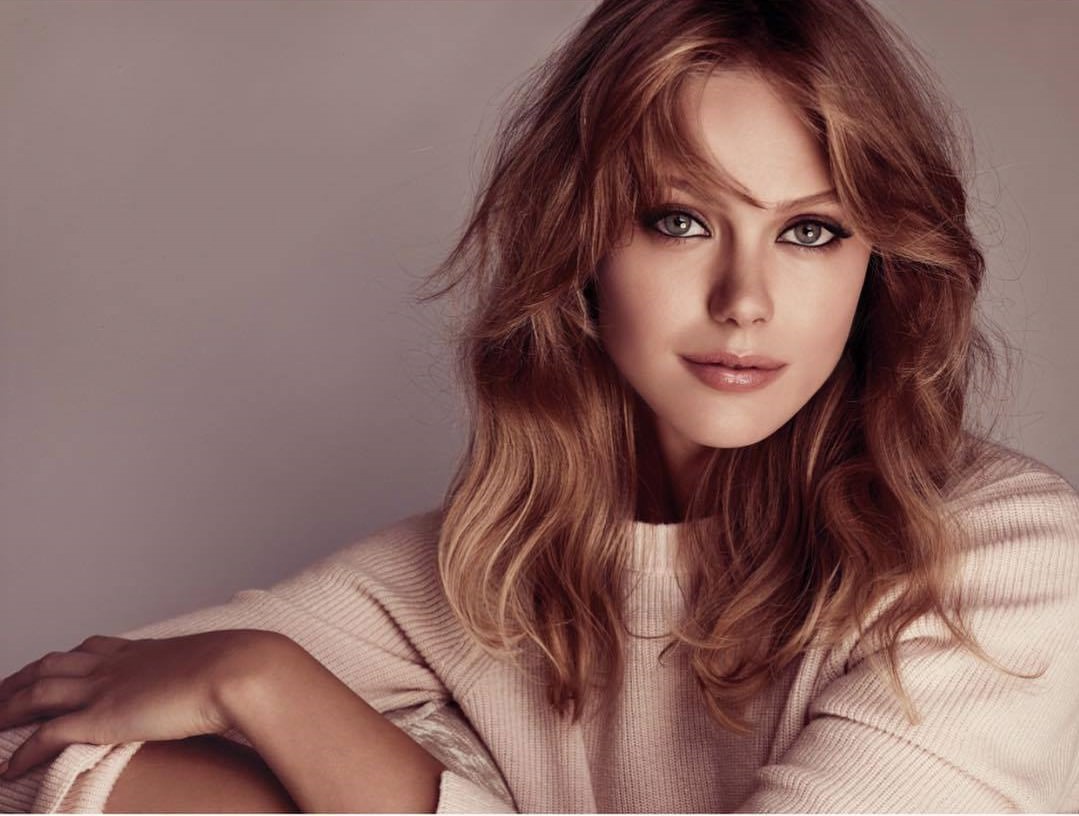 Thank you for inviting me again, Mary!  It’s always a pleasure to come and speak for your class.

Anyway, hello again class!  I’m not here to lecture on transmutations today, but rather Professor Mitchell asked me to share an adventure from my life where something as simple as a basic transformation came in handy.  This story in particular comes from my first year as an Alchemy professor at Beauxbatons Academy of Magic.  Ah, let me clarify, I was employed previously at Beauxbatons following four years of travelling around the world.  You may be wondering “Do you even know French?” and the answer to that question is yes, yes I do.  My mother’s family is from Monaco and we would visit every summer, so learning French as a child became a requirement in my household and thus also factoring into probably why Madame Maxime was crazy enough to hire me as a fairly new teacher.

Anyway, I remember the day clearly.  I was in the laboratory advising a Sixth Year student on a transmutation project they had proposed earlier on in the year.  That morning Professeur Descoteaux, the Potions professor at the time, asked if I could look after his pet rat, Romain, while he was away from the castle for the day.  Since I was watching Romain, I had to bring him with me while working with this student.  Now, I would like to reiterate before I continue that this is very early in my teaching career.  In this particular stage of the project, the student didn’t necessarily need my guidance. More or less I was there to make sure nothing went wrong.  Because of this, I stopped paying attention to what the student was doing around half an hour in and was overwhelmed  with absolute boredom.  Meanwhile, Romain was minding his own business in his cage.  Through some stroke of genius, or stupidity in actuality, I decided to practice a simple animate to inanimate transformation spell.  I took Romain out of the cage and transformed him into the first thing I saw, a crucible.  As I was about to transform the rat back into his original form, a student knocked on the door to the room, delivering a message about something that needed my immediate attention.  Completely forgetting about poor Romain, I left my student alone to work on the project.

When I returned to the room several minutes later, in a slightly better mood, I looked at the table where Romain had been sitting as a crucible.  To my surprise, he was gone.  I glanced around the room in a slight panic before looking on in horror as my student was about to place the crucible in the furnace.  Quickly pulling out my wand, I casted the General Switching Spell and swapped out the Romain crucible with an actual crucible.  Nonetheless, this sudden outburst shocked the student, especially when I returned Romain to his original form.  I was lucky that I walked in when I did, otherwise I would have a livid Potions professor planning my death sentence.

If you gather anything from this story, do not leave your transformed animal around unattended and simple transformations can indeed save your life as well as your reputation.  Also, I have grown so much and become much more responsible since this happened so there’s no need to fear when you are in my class.  Thank you once again, Professor Mitchell, for inviting me and good luck to all of you on your finals!

Thank you for joining us again, Sera!

Looking ahead
If you remember your very first lesson in my class back in First Year, I gave you an outline of what you were going to learn throughout your seven years of Transfiguration.  Well, you’ve survived transformations, meaning you’ve made it through over half of the curriculum and get to move on to bigger and better topics next year and beyond! Don’t go dropping all you’ve learned these last four years from your mental bank, however, as at the end of next year you will be sitting your O.W.L. exams.  These Ministry proctored tests will quiz you on everything you have learned from Year One through Year Five.  I expect great things of my N.E.W.T. students, so in order to move on to Year Six Transfiguration, you must obtain at least an Exceeds Expectations on your O.W.L.  I believe all of you will be capable of this as long as you prepare properly.

So, what are you going to be learning next year? Vanishment! This is one of my favorite branches of transfiguration due to the many uncertainties surrounding its theory.  We will be discussing this theory, along with the General Vanishing Spell, banishment, and teleportation amongst other topics throughout the year.

Year Six is the year I’m sure you’re all looking forward to you, presuming you pass your O.W.L.s with the appropriate grade.  This is the year we will go over conjuration in all of its glory.  You’ll learn how to conjure everything from water to rope to birds to music.

Finally, Year Seven will begin by covering untransfiguration and human transfiguration and will end on some more advanced topics in transfiguration.  We will be going into some of the more debated and mind-boggling theories that have plagued researchers, but I’m going to have to leave you wondering on what those might be.  I wouldn’t want to spoil all of the surprises, after all.

Conclusion
I sincerely hope you all enjoyed Year Four Transfiguration! As always, you have a final exam and three options for a final essay.  Good luck and I hope to see everyone back in the classroom next year!